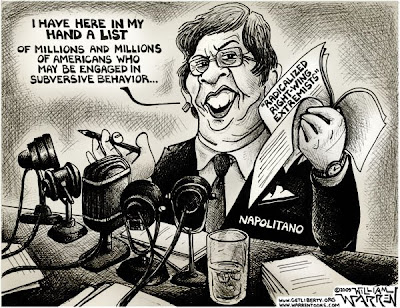 We were already a Nation of Cowards and too frightened to allow passage into our government buildings, airports without suspending our Constitutional rights. Instead we search each other like criminals. We didn’t trust the pilots that we count upon to safely transport us with firearms to combat airplane hijackings.

Had we allowed the pilots their right as citizens to carry a gun or for that matter those disarmed sworn police officers that were passengers on two of the four planes 9/11 would have been just another day.

The TSA program and other “safeguards” will never work to prevent mass murder and mayhem committed by terrorists. The government’s “fix” has been intrusive, humiliating, and un-American. Despite massive and lavish efforts they have yet to stop a single terrorist event.

The massive amount of cash we must hand over to support these liberty stealing security programs has gone straight down the toilet along with our privacy and freedom.

None the less most Americans feel so good after an exhaustive groping by some unemployable slug working for the TSA. Anyone that thinks the TSA program can have any effect at all on terrorism is nothing less than a complete fool.

Terrorists by their nature seek heavily populated, soft targets. They simply sneak in killing and destroying during surprise attacks. Even if you could protect one or more venues terrorists will always find another one to inflict their horror.

Somehow Americans seem to think that terrorists need sophisticated or exotic weapons that are difficult to obtain. Gasoline and explosive fertilizer are cheap, virtually impossible to regulate and incredibly deadly.

Attacking a crowded shopping mall, convention center or tourist magnet is hardly a difficult challenge. No amount or searching, snitch programs or government efforts could stop a motivated terrorist.

On the other hand armed Americans with minimal training could better deal with terrorists as they commence an attack. Calling 911 and waiting for the “authorities” to act will bring help too little and too late.

The best example of government response to a terror attack was when two twisted teens attacked Columbine High School. Responding to numerous and desperate 911 calls the Jefferson County Sheriff’s Department sent their officers to parade around the school with the jackboots and bucket helmets until every last victim bled to death. The cops finally entered the school only after the two whackjobs took their own lives.

Had there been even one minimally trained and armed teacher, janitor or cafeteria worker in the school, lives could have been saved.

We have learned nothing about combating terrorism and have let politicians steal massive amounts our cash, along with our precious and hard won liberty.

I can’t help but despise people who willingly line up like helpless sheep and submit to anything the government tells them. I can’t help but think of how it took only a handful of Nazi guards to coral a thousand concentration camp inmates into the gas chambers.

Even more disgusting was the reality that other camp inmates would knowingly assist the Nazis commit mass murder rather than to fight for their own lives.

It’s really very simple once you study history enough to know that the greatest mass murderers on earth are always governments. Sooner or later every government in history turns on their own people.

The only way to insure survival is to ferociously resist any government attempt to take any liberty for any reason. The moment right to keep and bear arms, is suspended or eliminated you soon can expect to be on the receiving end of government terror.

The troops are fighting for my freedom? Wrong. If they were, they'd have Washington D.C. surrounded by now! Only congress can take your freedom, not some medieval twit sitting in a cave half way around the world.

Re: the cartoon - let's not carry the Napolitano/Dept. Of Homeland Security = McCarthey/House Un American Activities Committee analogy too far. The senator from Wisconsin after all was an American patriot and WW2 vet, an elected official subject to the control of the voters, and he had legitimate targets in the commie infested Roosevelt/Truman administration. Any one of these qualifications raises his activities far above those of Big Sis.

And yet the officers with the Chicago Dept of Aviation Police are still unarmed! Academy graduates and certified law enforcement officers....UNBELIEVABLE!

Anonymous said...
And yet the officers with the Chicago Dept of Aviation Police are still unarmed! Academy graduates and certified law enforcement officers....UNBELIEVABLE!

Its probably best they do not get any weapons.

Columbine is the perfect example of all this new SWAT nonsense. Armored vehicles, overdressed idiots, "stacking" in the doorway and the list goes on. These new "pussy" police train and train and yet they and all their great equipment and training never get there in time at the vast majority of these incidents. Nothing makes up for the "REAL POLICE" who go in right away and take out the bad guys and actually save innocent victim's lives. As a CPD "old timer" it has always disgusted me to know that many of the Columbine victim's actually bled to death while every cop at the scene stood around outside getting on their latest SWAT cool stuff awaiting somebody with balls to go in and kill those two pieces of shit. For all you "new" guys who think this SWAT shit is so great, remember nothing ever makes up for the "REAL POLICE" who realize what their job is and the risks that go along with the job.

Well, at least we have the patriot act to keep the terrorists at bay. Oh wait, it was used over 100x more often on drug crimes than terrorism. http://nymag.com/news/9-11/10th-anniversary/patriot-act/