Official Crimefile review of, THE DEBT 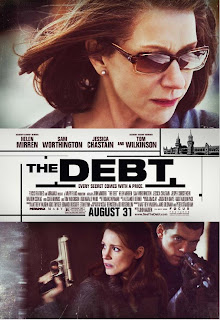 Los Angeles, CA—I refuse to write reviews about films that stink. I've seen far too many stinkers over the last several years. Today, I have a winner for you.

I don’t recall a bad film with Helen Miren or Tom Wilkenson. They are great actors that somehow cast in better films. The Debt is right there on top!

This is a terrific script brought to life by a superb ensemble cast. It’s a period piece that begins in 1966. This is ripped from the story or the infamous physician from Hell, Dr. Josef Mengele known as the Angel of Death (German: Todesengel). Mengele was a German SS officer and a physician inflicting horror at the Nazi concentration camp, Auschwitz-Birkenau.

In reality the fugitive Nazi was nearly captured a few times but always slipped away. Mengele died on February 7, 1979, in Bertioga, Brazil, where he accidentally drowned or possibly suffered a stroke while swimming in the Atlantic.

This film is loosely based on a fantasy Israeli Mossad Aldolph Eichman style kidnapping operation that takes place in East Berlin in 1966. It fast forwards to 1997 as we watch the young virile agents find themselves middle-aged.

The story is thrilling and deeply explores those thoughts we all have about going back in time and undoing past mistakes. Of course you can’t go back but can you sometimes repair things later in life? The thought process of the writers is amazing as they bounced back and forth through time. The film sports a dual cast playing the young and now aged characters.

The Nazi fugitive is masterfully played by Jesper Christensen. Oh what I’d give to have his acting chops!

I say spend the bucks and enjoy yourself!

You will never be able to rid yourself of false guilt. You weren't there. You didn't do it. Ever see a movie about the communist atrocities? Never. Never will. The commie atrocities continue to this day. Not on the same scale as the 20's, 30's, 40's, 50's, and 60's, but don't underestimate the Reds.