How About a Death Penalty Compromise? 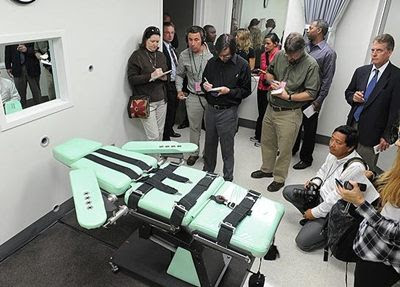 Phoenix, AZ—Putting convicted killers to death is wildly popular in the United States. It’s the final retribution and deters future criminal conduct, at least by the condemned prisoner.

Let me be the first to say I’d much prefer to see many more justifiable homicides by Americans fighting crime where they live and work.

Our justice system is a mess. Jurors get way too much outside influence and despite court rules they are busy surfing the web and social networking sites before and during deliberations.

There are so many cases these days where the guilt of the accused is arrived at by simple guesswork and probabilities. Most troubling are those cases where medical examiners can’t even provide the cause of death! Murder is assumed and even though there are no witnesses, prosecutors can make the jury hate and convict the accused. That is beyond scary and un-American.

Because of Constitutional guarantees imposition of a death sentence take from 10 to 30 years as appeals grind through the courts. What people need to know is taxpayers fund both sides of the appeals and when the death penalty is involved those cases cost several million dollars each!

People sent away for life don’t get the financial resources that are available to the condemned. The life sentences that are handed out as a result of plea agreements are rarely seen in appellate courts. The death cases are always litigated up and until the very last second.

Most people on death row are career criminals who are really guilty. Being a habitual criminal invites suspicion and arrest with the thinnest of evidence. Some times just being known by police in a crime infested neighborhood will get these people caught in the police dragnet after a serious crime.

There are an amazing number of people sitting in condemned cells with no criminal record, other than their current conviction!

I hope there is nobody reading this story that wants innocent people strapped down to a table and killed for crimes they did not commit. It happens and you or someone you love could suffer unimaginably when our justice system fails.

There is something simple that can be done to preserve the death penalty and yet end forever the frightening specter killing an innocent person.

Simply changing the government’s burden of proof from beyond a reasonable doubt to, beyond a doubt before imposition of a death sentence. A second higher hurdle for death cases would save hundreds of millions of dollars and take the guesswork out of killing people like Troy Davis.

With fewer death penalty cases clogging up the courts, the process can be speeded up for those that deserve the ultimate punishment.
Posted by Paul Huebl Crimefile News at 9/26/2011 08:18:00 AM

Im with you 100% CF.Isnt it better to allow the crime victim/target defend themselves by any reasonable means(guns,clubs,knives,sprays,pipes bats,submachineguns,etc) so they can live and the bad guys or gals do not.
The whole system is nuts and total broke.

Texas is doing the best they can and the other southern states are also doing what they can to execute these dregs of society.

Maybe you can help push the CCW laws in Illinois? Im a multi permit holder but live in Illinois where you "cant" carry a gun. Coincidentally,Illinois has one of the highest crime rates as opposed to oh lets say Missouri were there IS CCW and Stand your Ground Laws.
Illinois is flawed. Seriously. We need to fix that flaw.

I notice a lot of noise and see a lot of demonstrating when a black cop killer is executed. What about the white guy that dragged a bleck man to death? I didn't see too many objections to the death penalty with him.
I am not against the death penalty, however I am against the long drawn out appeals process. We have very few death sentences as a percentage of our population and it would seem possible to have an appeals process that proceeds thru the State system and then the Federal system utilizing judges whose sole job is to review death penalty cases.
The other option, and I believe it may be a better, less expensive solution would be to have life without the possibility of parole.
With the life without parole sentence these prisoners could all be kept in one prison, isolated from all other prisoners, and the only way to be released would be to have evidence which proves innocence.
Paul in Texas

The "black cop killer" was probably innocent, and the white guy was unquestionably guilty. That's why there was "noise for the former and none for the latter.

Paul's plan for a beyond-doubt is a good one if jurors would actually use it. Dunno if they would be that conscientious, even if instructed.

Life in solitary with basic tv, a portable radio and an hour of exercise sounds fair to me.

I agree, broadening the circumstances where people can use deadly force in self-defense will eliminate much of the prison population, and make us all safer. It's time to let would be victims shoot the vermin to death when they attack, then all the police need to do is ID the body and take it to the coroner.

No, I'm perfectly willing to let a few "innocents" be shipped prematurely to the next world. We need to keep the executioner from getting rusty and we need to keep fear alive in the hearts of the bad seeds. Implement a beyond doubt standard for a juror pool made up of the mush-for-brains who put Obama in office (or, for that matter, who think a Republican is the answer)? You've got to be kidding! The average American today can't follow anything more complicated than a one minute story on tee vee news, and you expect him to make up his mind absolutely on something? This will make the pace of today's trials seem like light speed. To put this in the most brutally honest way I know of: there is next to zero chance of one of my loved ones being wrongfully put to death; while there is, however, a very good chance one of the piles of garbage wrapped in human skin walking my street will do one of us in any day.

kilo4/11
You need to think a little more about your stand. You seem to forget who is in charge of the federal death penalty and justice department right now.

You are too young to know about another Socialist creep that sent over 5,000 good citizens to gruesome deaths for passing out leaflets critical of the government. His name by the way was Adolph Hitler.

Do you really trust any government with the power to kill you or someone you love?

You have seen the malfeasance within the "justice" system up close and so you understandably have a greater appreciation of the harm its agents work than I do. I will cop to being short-sighted, but it's only because the air outside my window is so thick with brutes that I just can't see the danger from the suits.

If you think street thugs are bad wait until Martial Law is declared by the anointed one and his loyalists come to visit!

I thnk the smell of gunsmoke will be thick in the air sooner then we can imagine...