What’s With The Turban? This is America! 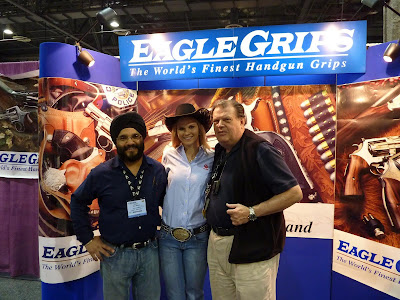 Las Vegas, NV—I received an interesting comment that became the headline for this story. I thought it was a fair question that deserves an answer.

Turbans are worn in several styles by different Asian ethnic or religious groups. The turban that Raj Singh wears every day of his adult life was earned as a rite of passage. Singh is a member of the Sikh religion. You also need to know that in Sikhs are a small minority in India where the religion was founded more than 500 years ago.

Sikhs unlike many religions don’t stop to publicly pray every day and other than the turban, their good conduct, a simple bracelet and a dagger (when not in conflict with local laws) there is no outward sign of faith. Unlike many religions, Sikhs don’t care about the faith or lack of it that surrounds them. Sikhs all believe in the simple Golden Rule as do good Christians.

Raj is every bit an American. He’s a husband, father, businessman and proud member of the National Rifle Association. None in Singh’s family has ever needed or desired government handouts, free medical care as they have paid extortionate amounts of tax money to the their country of choice, the USA. No member of this family has had more than a parking ticket.

I met Raj’s dad Harbans after I returned home from the Army four decades ago. Long ago they adopted me as a family member. They also host me at their beautiful India home whenever I find the time to go there.

Sikhs can be found fighting on the right side of every war as outstanding military soldiers. Sikhs have served in every branch of the American military too.

When you are in danger or need the Sikhs can be counted on to help you. The Sikhs always deserve your friendship and respect.
Posted by Paul Huebl Crimefile News at 1/24/2010 09:40:00 AM

I wanna be a cowboy.

And she can be my cowgirl.

HAVING MET RAJ, I TOOK WOULD SWEAR HE'S A LOYAL AMERICAN - BUT - TAKING YOU INTO HIS FAMILY, THIS IS SUSPECT!!! WHO IN THE WORLD WOULD ADOPT YOU PAUL? THIS SURE DOES NOT SAY MUCH FOR RAJ. I MEAN, WITH OR WITHOUT THE HEAD-WEAR - I'M SURE RAJ SCARES THE HELL OUT OF UNINFORMED DUDES WHO CAN'T TELL A GUY FROM IRAN OR INDIA WHEN HE TRAVELS! THE BEARD IS WHAT WOULD MAKE MOST UNINFORMED GUYS KEEP AN EYE ON HIM DURING A FLIGHT! I'M GLAD I KNOW RAJ, SO HE CAN'T SCARE ME! HE'S JUST ANOTHER NRA AMERICAN COOL CAT! THE OLD COPPER

Don't forget that Raj has been active in IL too by going to IGOLD and SAFR rallys.