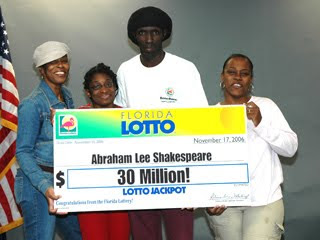 Polk County, FL-- Abraham Shakespeare was an illiterate, petty criminal living hand to mouth as a trucker’s helper. His life changed in a big way when we won the Lotto jackpot. He got a $17 million cash payout.

Shakespeare became more popular than a rock star to people that knew him. Then there were his brand new friends like, DeeDee Moore.

Moore claimed her new friend went into hiding after giving her a $ 1 million dollar cash gift. The bad news is they found Shakespeare’s hiding place. He apparently must have buried himself under a concrete slab on property owned by his new “friend” and her boyfriend. By the way our lottery winner was very dead. Medical examiners are trying to rule out lottery fever as a cause of death at this hour.

Somehow I suspect that DeeDee is scrambling to hire a good criminal lawyer right now.
Posted by Paul Huebl Crimefile News at 1/30/2010 08:40:00 AM

Hard to believe what "Folks do to Folks"!

It was a case of brotherly love
(gone bad)!

And he was just beginning to turn his life around. He had signed up for GED classes at Olive-Harvey.