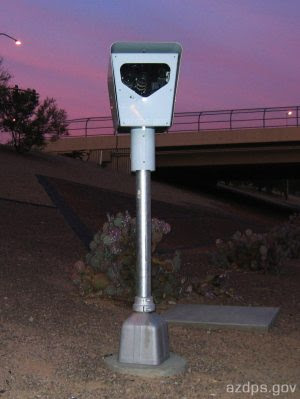 The current court rules requires that any court summons be served under civil process Rule 4. That means a process server must locate and serve the violator or a person that also resides at the violator’s residence. The system is overwhelmed and the summonses expire before they can be lawfully delivered.

They are trying to sneak through a legal exemption to allow sending the summons by first class mail to the alleged violator’s last known address. The risk here is that the company could obtain a court judgment without the violator knowing about it or being able to contest the matter in court. This rule change would be done by Arizona Supreme Court judges, most of which are Democrats apponted by former Governor Naplitano. The legislature and curent governor would be bypassed along with debate.

Vacationers, people traveling on work assignments, military duty and simple hospitalizations could victimize those targeted. As a result, property seizure or garnishment could be levied against people that are innocent or at least unaware they were cited by the Robocams.

To stop this effort people must contact members of the Arizona Supreme Court at once.

The Robocam Extortion Program contract is due to expire. Governor Jan Brewer has vowed to end this vile and pernicious practice brought to Arizona by former Governor Janet Napolitano.
Posted by Paul Huebl Crimefile News at 1/16/2010 05:36:00 AM

Whatever happened to due process??
I can see several civil rights violations causing people to be jailed due to lost or undeliverable mail. When a Police officer issues a summons there is no question that the speeder was notified of a summons and court date. Aside from the fact these cameras are a bad idea, on several levels, and should be abolished, the answer to a problem seems to be to eliminate constitutional rights to make it more convenient for enforcement. This must stop
Paul in Texas

Sounds like another greedy fiscal prostitute that cares not about this Nation, but only for themselves and their own pockets.

I involve my linked Assassination Proclamation onto them. Get rid of those commie cameras

I quote this morning's Arizona Republic, "More than half the voters who responded to a phone survey last year supported the photo-enforcement program."