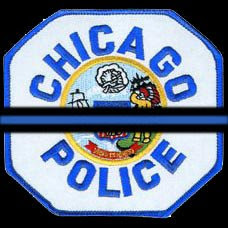 019 District—Officer Richard Francis, 60 Belmont Avenue officer with 27 years on the job was apparently shot dead by a woman who snatched the officer’s own service pistol. The woman was also shot by another officer. Both the officer who later died and the female suspect were taken to Advocate Illinois Masonic Medical Center. The woman was in critical condition.

Officers please be careful and always follow your training.

Read more about that here.

An on-duty Chicago police officer died early Wednesday after a woman took his gun and shot him near a Northwest Side police station. The woman was then shot and wounded by responding officers.

A Belmont District patrol officer was fatally shot about 2 a.m. near the intersection of Belmont and Western avenues, police Supt. Jody Weis said during a press conference.

The officer, on routine patrol, was at the scene of a “disturbance” and approached a woman. A struggle then ensued between the officer and the woman and she grabbed the officer’s service weapon and shot him, Weis said.

The woman then threatened responding officers, who shot and wounded her, according to Weis.

The shooting happened near Belmont Area headquarters, at the 2400 block West Belmont Avenue.

Dick was a happy,go lucky guy. Rest in Peace brother!!!

He gave his life AND his gun. Such a fatal error

RIP my brother. My prayers to you and your family. This hasn't been the first time a PO was killed with his own gun. I won't second guess what occurred, but maybe if he was riding 10-4 instead of 99, maybe the outcome would have been different. We need help but the Mayor is worried more about a new Children's museum than hire more cops.

My thoughts and prayers go out to the Francis family. Officer Francis will never be forgotten as he is a true hero and heroes never die.

Please read the comments at the end,people are seeing the truth.


Are one-person patrols too dangerous?
RICHARD FRANCIS | Some question safety

Chicago Police Officer Richard M. Francis was patrolling alone when he was shot to death -- renewing decades-old questions about the department's use of "one-man cars."

Thirty-five years ago, after Officer Robert F. Wenzel was killed, the Fraternal Order of Police and others blasted the department for allowing officers to patrol alone, saying they needed a partner to back them up in dangerous situations.

Hours after Wenzel was killed, then-Police Supt. James B. Conlisk Jr. announced that "as soon as possible," all patrol and traffic division cars would have two officers on after-dark shifts.

The FOP had encouraged officers to refuse to work in one-man cars regardless of the time of day, calling them "rolling coffins."

"There is a need for both one-officer and two-officer patrol car operations. [But] during the hours of darkness, district patrol units will normally have two officers assigned, unless operational requirements dictate otherwise."

A sergeant said he frowns on one-man cars at night for safety reasons, but they're still allowed because of manpower shortages and because some officers prefer to work alone.

Francis, 60, normally worked with a partner in a squadrol -- a police wagon -- but opted to work alone in a squad car on his early-morning shift Wednesday because his partner was off duty. He was killed while responding to a disturbance involving a CTA bus. A mentally ill woman disarmed Francis and shot him in the head, police said.

A two-officer squad car was about a block away when Francis called for assistance. The arriving officers shot the woman, identified as Robin Johnson, 44, when she threatened them, police said. She remains in critical condition
http://www.suntimes.com/news/metro/1040182,CST-NWS-copcars04.article#