Why Are The Border Jumper's Rights People Angry? 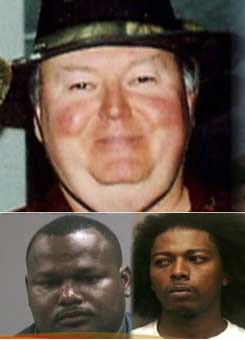 Houston, TX.-- Shot-gunner of The Year, Joe Horn, 62 was cleared of any criminal conduct by a Harris County Grand Jury. Mr. Horn saw his neighbor’s home being burglarized by two burglars who were also illegal aliens. Horn called 911 and did not let some poorly trained civilian call taker miles away give him what may have been bad advice. I say that because only two rats were killed and no innocent people.

I’m, not sure just why the border jumper's rights folks got involved in this unless that think illegal aliens have the right to victimize Americans after they sneak across our borders. I guess in the end that’s just how they feel.

Horn violated an important law of survival, that of conflict avoidance. There are only so many rats you can confront even with a shotgun before they kill you first. It took guts to do what Horn did. I see no crime even if anyone has shotgun wounds in their back. This involved multiple offenders and the lone Joe Horn had no way of knowing just how many burglars there were of how great the threat.

When a substantial portion of the American population supports home invading burglars over a senior citizen trying to stop them it’s easy to see why this country has so much serious crime.

Some have called Horn’s actions a Hate Crime. There was hatred all right, hatred of criminals invading homes.

Today the calls are for a FBI investigation into the violation of civil rights of the dead rats. Horn was no public official acting under color of law. Horn was just a desperate man demanding his right to be safe from criminals.

Had this happened in Chicago the politicians would be demanding the death penalty for Joe Horn. I bet horn’s Pasadena, TX neighborhood is safer these days then even Mayor Daley’s. Perhaps it’s time to turn the tables more often on predatory rats like the late Diego Ortiz, 30, and Hernando Riascos Torres, 38.

I hope the word gets out that burglary is very dangerous and a really poor choice of an occupation.
Posted by Paul Huebl Crimefile News at 7/01/2008 02:18:00 PM

A Chicago Police officer is in critical condition after being shot early Wednesday near a Northwest Side police station.

Belmont area and district headquarters are at the 2400 block of West Belmont Avenue.

Hope that the officer is okay,things can happen anywhere even in 019...

RIP Brother,May God Grant You Eternal Rest and Peace to Your Family and Friends...

We Will Never Forget!!!

These Savages,St. Michael the Archangel Guard and Protect Us!!!

CFD fireman gunned down the other day now a CPD officer murdered today. The savages have declared war upon law and order in Chicago,God Bless the CPD and CFD.

It's a very sad day in the USA when a policeman is murdered doing his job.

Joe is my hero