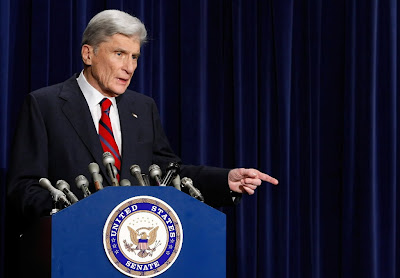 Leave it to a pretend Republican to be an auto insurance company shill and try to shove that hated 55 MPH speed limit down our throats. The real issue was that local governments hated losing the massive revenue generated by traffic citations not really involving traffic safety.

With the new unmanned photo technology just think of the billions in salary hikes, improved benefits and better than ever getaways for conferences our politicians and bureaucrats can enjoy. That while we enter another great depression over oil speculators and the government assisted mortgage lenders that have created an incredible mess.

Our insurance companies never once reduced rates in the 21 years of the since repealed 55 speed limit despite their assertions that accidents and deaths were reduced. These companies are in the business of taking us for all they can after government ties us down for them to rob us with mandatory insurance laws. Trust me, before mandatory insurance laws the best bargain was uninsured coverage you must buy today anyway. They rape us worse than ever.

This was never about saving fuel but about the prostitution in the sacred halls of Congress. More money to steal and more cash for re-election campaigns.

This is where Americans need to storm the capitol and call for the hanging of scum like Senator John Warner.

If they are from the government they are here to rob you. Thank God for the Heller Decision maybe we can stop them someday.
Posted by Paul Huebl Crimefile News at 7/04/2008 11:49:00 PM

Yeah, you're right.
But I'm takin' the day off. We're getting a rental car with a free-day coupon, driving from Phoenix up to the top of Mingus Mountain (8800 ft) near Prescott, and drinking our Starbucks and eating a Subway sandwich for lunch. We will probably watch the hang-gliders jumping off the edge of the cliff and flying down to Cottonwood for a while before driving down the other side of the mountain to Jerome where we will sit at an outside patio and have some apple pie. Or, we might stroll into the biker bar and have a beer. Who knows?
Then it's back down into the desert and 113 where we will relish the memory of "just a nice day."
Let the vitriol go for a day, Paul. Gisela's at the top of State Street in Santa Barbara is really nice.

The speedometer on my VW New Beetle goes to 160mph.The car was designed for autobahn speeds.55mph is pure BS and has nothing to do with safety.

At the top of Mingus, pea-sized hail battering the rental car while bolts of lightning did a "Fl-Bang" with flash and bang so close together we got the heck out of there and drove down from the fractured trees at the peak before stopping to wait out the storm that dumped on us. While it rained cats and dogs and hailed enough to cover the ground, we enjoyed an in-car picnic. Outside it was in the low 60s when it finally stopped, too cool and muddy to hike around in our shorts but absolutely wonderful to smell wet pine mixed with ozone.
We skipped the the bar in Jerome where all the bikers had their scraggly hair slicked-back wet (ever smelled a rain-soaked biker?).
Upon returning to 107 in Phoenix, we put $42.43 in the gas tank at CostCo and felt the day was worth every damn penny.
Hail and sleet in July! (Who can't love Arizona?)
Now what's this crap you're complainin' about, Paul?