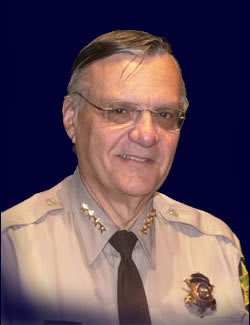 Phoenix New Times Executives, Michael Lacey and Jim Larkin were arrested last night in their homes by members of the Maricopa County Sheriff’s threat assessment team over their published article.

At the heart of this arrest is a decade old Arizona law that makes it a crime to publish the home address of a peace officer or certain other public officials on the Internet. The law has never been challenged and may well be in conflict with the First Amendment to our Constitution. That same protection applies to nobody else and may in itself violate the 14th Amendment with respect to equal protection. Because home addresses are often public records they can be found on the Internet and certainly in the files of many government agencies.

The Phoenix New Times published copies of the secret Grand Jury Subpoenas served upon them and informed their readers that the subpoenas invaded their privacy by demanding information that would reveal other sites they visit before and after the New Times.

The self-proclaimed, “America’s Toughest Sheriff”, Maricopa County Sheriff Joe Arpaio is at the heart of this case because of a large number of articles critical of his administration. The New Times also published Arpaio’s home address. That’s the same address listed on public nominating petitions he’s required to make public each time he runs for office. Of course the address is in plain view of the thousands of voters that must sign the petitions.

Both Lacy and Larkin were released from the Maricopa County Jail after posting bail on the misdemeanor counts. A throng pf reporters greeted the two newspaper men as they left America’s Toughest Jail.

You are about to see a giant litigation slugfest unfold. The Players are two lightening rods of Arizona law enforcement, County Prosecutor, Andrew Thomas and Sheriff Arpaio along with two Arizona newspaper publishers. Stand by while we soon learn if the First Amendment still exists in Arizona! My money is on Freedom of The Press.

UPDATE: Today a red-faced County Attorney, Andrew Thomas announced an end to the investigation and prosecution of the New Times, Lacy and Larkin. Thomas cited numerous mistakes as his reason to drop all charges in this matter. Phoenix lawyer, Dennis Wilenchik of Wilenchik & Bartness PC has been acting as a special prosecutor on behalf of Thomas’ office. As of today that relationship has been terminated along with the Grand Jury investigation that was instigated.
Posted by Paul Huebl Crimefile News at 10/19/2007 07:21:00 AM

While he's done some good things, his megalomania leads him to do even more bad things, it seems. Recently it was disclosed he's blown a half-million bucks on a preposterous investigation based on an alleged alliance between border-watching Minutemen, Mexican drug-runners, and a prominent immigration advocate.

Though he's very popular with many of the casual-observer locals, lots of conservatives here are increasingly fed up with his incompetence.

I can't believe you think it is alright to publish the home address of a peace officer. I think you have forgotton from where you came and are too busy trying to get in with those Hollywood types. I feel sorry for you.

The country I was born into has freedom of the press. That means they can print their opinion and true facts. If they get my address they can publish it. The same happens to suspects all the time even if they’ve been convicted of nothing. I learned long ago proper and legal ways to mask my ownership of real property and hide my actual address. Cops need to know how to do this. In the City of Chicago there cops who are experts and defeating the residency requirement. Freedom of the press is important to all of us.

Freedom of press also carries responsibility. Can you not see how the publishing of an address places an officer's family in possible peril?

A guy arrested years ago (whom you do not even recall) sees the address and takes it out on your family or property. I see that you now advocate officers living outside the city, knowing it is against departmental guidelines.

Boy, has it really been that long that you have not been the police? I do not mean to insult you, but it appears you are too much trying to get on the same side of the Hollywood types in favor of the police.