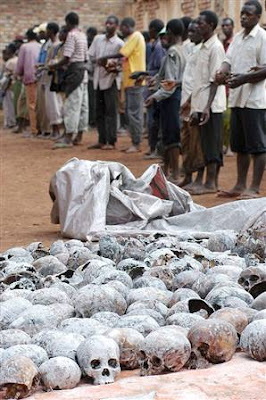 The call made by many today is for genocide intervention in Darfur, Africa. Darfur is only an example of a much larger problem of what happens when governments have onerous and effective gun control laws. Of course rogue governments are far more successful when they have unlimited powers to search the homes of civilians in order to disarm them.

Constant, wholesale slaughter and genocide has been a reality in Africa. Many hundreds of millions of Africans have been tortured and murdered, too often by or with the help of their own governments.

If all African citizens had firearms this kind of carnage would be impossible to carry out. The Liberal American approach to bring an end to the wholesale murder in Africa is to involve United Nations and American troops. Who pays for that kind of intervention and with how many American lives? Doesn’t sending arms and a few advisors to teach vulnerable Africans who to use them in order to survive make a lot more sense?

Groups like the Genocide Intervention Network just don’t get the concept that arming the entire population of a country saves lives. The majority of the human races are good folks trying to survive and raise their families. Genocide is always the work of a well-armed minority of evil people who intimidate, control and murder as a way to gain riches and absolute power. Can folks like Adolph Hitler, Josef Stalin, Pol Pot, and Idi Amin really carry out their murderous agendas against well-armed populations?

Right now the United Nations is trying hard to bring about GLOBAL GUN CONTROL. Under this effort only governments will have firearms. Let’s all ask some questions. What’s the real motive and intent of the United Nations? Are the folks at the UN simply misguided and dumb or do they have really dark motives to take away the ability of people to protect themselves? Are governments somehow more humane and trustworthy than the civilians they control? Can we trust the United Nations where the majority of its members despise the American style of Liberty and a free market?

What’s both heartbreaking and laughable is how the gun-ban lobby always uses select statistics from other countries like Japan that banned civilian ownership of firearms for propaganda purposes. The same disingenuous lobby ignores the hundreds of millions murdered by their own governments across Asia, Africa and Europe where gun control efforts are even more successful. I say stop them before they kill more.
Posted by Paul Huebl Crimefile News at 10/01/2007 02:34:00 AM

Yea, like Im really going to trust the UN to protect me. They couldn't even control saddam hussein,it took Cowboy George to take him down. Take a look at every major massacre we've had in recent years that the UN failed to stop.
By the way Mr. President,thanks for Concealed Carry, I love u for it...