Meet The The Dean Of Arizona's Death Row 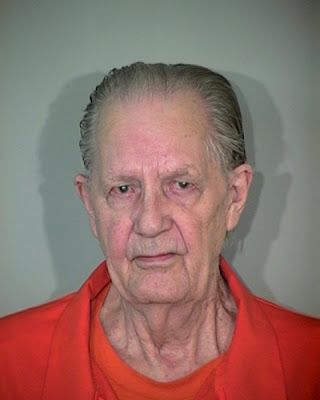 He's 92 years old! Convicted of murder and sent to a Utah prison he escaped and did it again at age 66. Viva L. Nash is exactly why the death penalty is so popular. This guy will die of old age before he will ever see the hot needle. I'm not fond of the death penalty but this case is not one I'd use to argue against it.

This guy was stopped by an armed law-abiding heroic Phoenix citizen.

I think we all wish we could make it to 92 and look that good! Many of my retired cop pals only in their 60s are in poor health and look older than Nash. I somehow don't think this was from clean living.

The following was taken from records of The Arizona Department of Corrections where this fellow is on Death Row:

While serving two consecutive life sentences for murder and robbery in Utah, Nash escaped. Three weeks later, on November 3, 1982, he entered a coin shop in north Phoenix, demanded money from an employee, Greggory West, and then shot Mr. West three times with a .357 Colt Trooper. Another employee, Susan McCullough, was in the line of fire but was not hit. As Nash fled, the proprietor of a nearby shop pointed a gun at him and told him to stop. Nash grabbed the weapon and the two men struggled over it. Police officers soon arrived and arrested Nash.

UPDATE: September 14, 2009 Arizona Republic Report:
The 9th U.S. Circuit Court of Appeals on Friday sent the case of Arizona death-row inmate Viva Leroy Nash back to a lower court to determine whether he is mentally competent to assist in his appeals.

Nash escaped from a prison work crew in October 1982, and a month later, at age 67, he shot and killed a Phoenix coin-shop sales clerk named Greg West. Nash was sentenced to death for that murder.

Nash's attorneys argue that his diminishing competence hampers his ability to communicate on legal matters.

On Friday, a panel of judges at the 9th Circuit ruled that he was entitled to a competence hearing.

The case was remanded to the U.S. District Court in Phoenix

Update 14 Feb 10: The Arizona Department of Corrections reported that Nash died of natural causes today. Nash is no longer the Dean of Death Row. At 94 Nash outlived the hangman but having spent decades on Death Row was no bed of roses.
Posted by Paul Huebl Crimefile News at 10/12/2007 03:51:00 AM