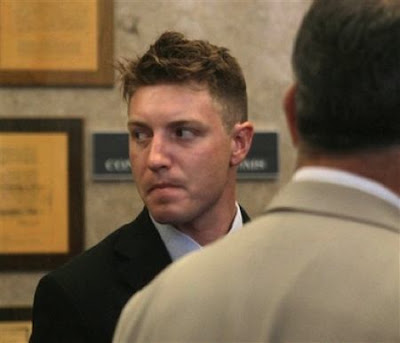 The star of the TV series Prison Break was sentenced to 40 months in the California State Prison. This was as a result of a plea agreement in connection to the drunken driving incident that took the life of 17 year-old Vahagn Setian who was a passenger in Garrison’s Land Rover when Garrison lost control striking a tree in Beverly Hills. Additionally two 15 year-old girls who were passengers in Garrison’s SUV survived.

Garrison had twice the legal limit of alcohol and cocaine in his blood. With good behavior Garrison will only serve slightly more than two years. Of course there are the civil penalties that are substantial that go along in these kinds of cases.

I fully expect this young man to face some real horror in prison. Young and goodlooking kids like Garrison are targets for extortion, beatings and the unwanted attention the Buga-Buga Boyz. There is a lot more to prison than simple loss of liberty.

When Garrison gets out there won’t be any Hollywood agents beating down his door signing him to those high paying acting gigs. Garrison will pay this debt off for the rest of his life.
Posted by Paul Huebl Crimefile News at 10/31/2007 09:16:00 PM

What part of DUI ACCIDENT don't they understand?

At one time there was a need for the ACLU, the NAACP and MADD. But just like the ACLU and the NAACP, MADD has gone way to far. Now MADD too is also a political propagandist machine.

I am a card carrying member of DDAM (Drink Drivers Against Mothers.) The biggest violators of DUI's are law enforcement. I know, because I was one of them.

Those passenegrs had a choice to say "no dont drive." Or not to get in his car. It's one of MADDS public service announcements.

I don't feel sorry for him. The victims in this case were youngsters who were probably thrilled to hang out with a celebrity. Unfortunately, they let the starlight blind them from using common sense.

He'll probably have a hard time in prison. Just another example of how alcohol can make a criminal out of anyone...if you should choose to drive. Too bad this is for real.

When you get behind the wheel of a vehicle drunk and end up killing someone, it's NOT AN ACCIDENT. You might as well have taken a loaded .357 mag. and fired it down the street to see if it hit anything. It's called Vehicular Homicide. I know, I lost my police officer son, Killed in the Line of Duty when his Chicago Squad was struck broadside by a drunk driver. The aftermath that follows losing a child, father, brother, sister, all because someone thought they could drive drunk, can not be described in words. Losing his acting career and a short stint in jail because of his "Accident" falls on deaf ears with me, he got off easy.