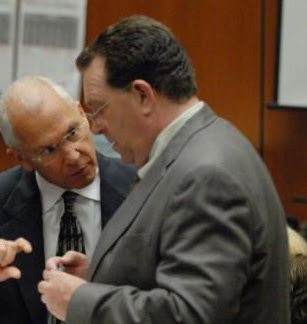 That’s how Roger Rosen described his fellow Spector defense lawyer, Christopher Plourd to Judge Larry Paul Fidler as he and the rest of the legal defense team made their exit from further proceedings. Let me not fail to mention that bay area lawyer Dennis Riordan is still on board for the limited capacity of filing various motions. Don’t expect Riordan to make local appearances for Spector in the near future.

The purpose of this mornings proceeding's was to sort out the retrial of the legendary record producer who still faces a murder charge in connection with the mysterious death of Lana Clarkson.

Even Christopher Plourd has no clue what role he will continue to play in this pending case.

The very petite lead prosecutor, Alan Jackson has not bothered to shave since the mistrial. Jackson was looking like he’s back from a week long bender with Jose Cuervo.

Even Judge Fidler recognized that Spector will have a difficult time finding a qualified lawyer with a calendar that is wide open and free for the next full year it will take handle a second trial.

Also in court this morning was Donna Clarkson, Lana Clarkson’s mother. She has been strung along by this dubious prosecution now for four long years. She is the real victim who’s been mislead by both cops and prosecutors about Spector’s involvement in her daughter’s death. I’d like to think she’s not motivated by greed to loot Spector’s estate. She seems ever so lonely but maintains a veil of dignity. I know she’d like to scream at Spector, his lawyers and those jurors that refused to convict. Mrs. Clarkson has demonstrated strong character by her very proper behavior. I wish she somehow could have intervened in her daughter’s suffering while she was still alive.

Donna Clarkson would probably hate me and my blog but I wish I could somehow take the hurt away from her. Donna Clarkson lost her precious and troubled daughter. Lana Clarkson was every bit of the star she wanted to be in her mother’s eyes. The most natural thing for this mother is to assign blame and seek justice for what she believed to be a murder. There is no cure for this grieving mother’s sorrow.

When this morning’s hearing was over both Rosen and Plourd tried to answer every reporter’s questions once they left the courtroom. I can’t imagine what emotional journeys these lawyers are going through right now. They given three or more years of their lives to this effort they won’t get back.

We will just have to wait and see just who will sign on to this case for the defense. The new trial will be very different and at this point totally unpredictable. Of course a second trial is never a sure thing since here are issues that may prevent that from happening. Again, if there is a second trial let’s hope it’s fair and brings a fair disposition.

Aside from finding competent attorney's with the balls to go against the mob that exists out there, I can't imagine that it could be possible to find any fair minded juror. After the lynching of juror # 10, who would be willing to subject themself to that kind of assault. All one has to do is turn on their computer to instantly learn not only the juror's name, but the names and descriptions of his wife and three young children, address, including a detailed description of his home. (In case you can't find it with just the address), place of employment, religious beliefs, etc. And if thats not enough to deter someone from jury service, maybe the public posting of pictures of your private family gatherings, which extends the danger to his entire family. How about the multiple psychiatric diagnosis, made by the idiots who think they felt qualified to render you mentally ill, and announce it to the world. Maybe the $5.00 you get paid each day to sit as a juror is sufficient for the damage done. I don't think so!

I see many roadblocks to trying this case again. There is no way a second trial will begin in six months as Fidler is demanding.

The prosecution won't have their 1101 b witnesses and will be reading their testimony if they even dare. Right now investigators are working with new witnesses that will describe the post trial remarks by these woman in full violation of Judge Fidler's gag order. Their former testimony will be so badly impeaced prosecutors will have no choice but to peel most of the five women off the case to sidestep new witnesses whos statements will be turned over to prosecutors by the defense.

I was talking to another average joe about the case. He didn't watch court tv's trial coverage. He just saw some unknown news bites. What he said to me was disturbing... "Oh you mean the guy who went outside and told someone 'I killed somebody' after shooting a woman in his house."

Even people who have not gone out of their way to find out more of what happened, still have impressions in this case.

What can be said about any potential juror who knows nothing about this case, at this point?

I don't believe Phil Spector can get a fair trial with Judge Fidler presiding. Fidler is so biased for the prosecution that he should recuse himself.

Juror #10 has taken a beating and I agree with the poster here who is concerned that the assault on Juror #10 will scare off potential jurors - probably ones who might swing with the defense, in my opinion.

DOOMED To Be Chastized & Gagged again by The Fidler in Trial 2 next year?

Who Will Stand For Phil Spector in Trial No. 2.

It certainly ain't going to be the Judge. It certainly won't be the Prosecution lawyers and their Prosection witnesses and it won't be Juror 10 and 1 from the first trial who did stand for Phil and reasonable doubt -

Instead it will be a fresh new set of jurors and defense lawyers.

Also I believe there really should be a fresh Judge. I am not sure why Judge Larry Fidler is still hanging in. He has been terribly biased - all in public view - as he would not let the defense lawyers probe too deeply- if at all- into the Prosecution's witnesses's testimony

And those defense attorneys such as Brunon and Rosen had to use immense patience and kid gloves in front of the Fidler otherwise they were doomed to be chastized by the Fidler and effectively GAGGED just as Bruce Cutler was by that judge – Bruce was right to run off and make a movie cause he couldn't help Spector when he was GAGGED by Fidler,

Also thanks to Fidler on the Roof - 106 - these prosecution witnesses were able to muster up alot of hooharm even in the ahaa moment - and there was nothing to stop them in Judge Larry Fidler's courtroom because of Judge Fidler's opression against Phil Spector – and those who love him - and Phil Spector's defense - with all those GAG ORDERS..

It wouldn't suprise me in the least - if someone from the Prosecution camp had left the death threat on Chelle's webpage against Judge Fidler - to dirty up the Spector Camp, stifling Spector and his story coming out in the US Press for public view..

So County Judge Larry Fidler allowed the circus of Prosecution's witnesses in to put Phil Spector down down down but blocked those Prosecution witnesses from being probed in any depth in front of the jury and in any detail.


Someone has since reported that Phil Spector fired his lawyers Bradley Brunon and Roger Rosen after the Mistrial was called..

Brunon apparently fired, because he cross examined the 5 prior bad acts witnesses, whom the jury said they ultimately believed,


And Rosen because he cross examined Adriano DeSouza, whom the jurors also said they believed.

Apparently jurors said that it would have been helpful to have had the psychological profile at their disposal. A couple of the jurors said that it would have been a tool they could have used to convince the “holdouts” that Lana did not commit suicide, since the two holdouts kept bringing this fact back to the others as “reasonable doubt”. One juror expressed concern that number 10’s personal experience with his friend committing suicide was the reason for his strong conviction that this could have been a likely scenario.

The five prior bad acts witnesses were important to the jurors and the guilty voters thought that Lana may have reacted differently to Spector than they did because Lana didn’t know Spector. They thought that she could have fought back, where the other women didn’t.

Some jurors seemed to believe outright the statement of DeSouza and did not question his ability to understand and interpret the statements he attributed to Spector.

The foreperson (and later his follower number 1), wanted to hear the videotaped statement to police again to determine exactly what DeSouza had said to police the morning of the shooting. After listening to the tape again, they thought that this bolstered their claim that DeSouza may not have heard exactly what he thought he heard. They pointed to the fact that DeSouza said in the taped interview “My English is not so good”. Jurors 1, 10 & 11, the initial not guilty holdouts, had a problem with DeSouza’s stammering on the tape when explaining what Spector said and thought he may have added something to the phraseology.

Well now there will be at least a fresh new set of jurors and defense lawyers and who knows maybe some new facts. Will the voting be any different next time or will it just be another hung jury

Phil Spector is to announce his new lawyers to Judge Larry Fidler on Oct. 22

Police Brutality day is an appropriate day for Phil to announce the identity of his new lawyers - because Phil Spector was at the brunt of police brutality after his chauffeur called the police to Phil's home on 3rd Feb 2003.

Every man's home is his castle but nevertheless the police felt it necessary to tazer and hog tie Phil for hours , and later fabricated a police report with an alleged confession on line 22.

In the first trial the prosecution never used this police report as evidence. I wonder why?

Who said you are innocent until proven guilty in USA? It didn't happen in this case.