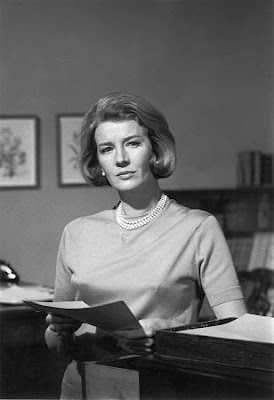 Of all the James Bond movies I’ve seen there are two bond girls that stand out in my mind as the most fun. There was the incredibly sexy Honor Blackman who played Pussy Galore in Goldfinger and then of course Lois Maxwell who rocked in 14 Bond films as the flirtatious secretary, Miss Moneypenny. Maxwell in her 40s and 50s could always hold her own as well as any sexy Bond babe half her age. Maxwell, a Canadian born actress has died of cancer on Sunday in London.

The shock I have to get over is that Maxwell was somehow already 80 years old! My thinking was that she was never a day older that she was in her last Bond film in 1985. I will never get used to death and dying because it seems so unfair. I guess we have to accept that we’re all in this together and none of us are getting out alive.

Here is Honor Blackman in 1964 and the present. She looks great for 80! 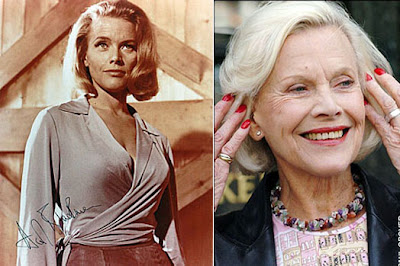 I've had a crush on Honor for a long time! I just recently bought some great autographed photos of her on Ebay.

Moneypenny was a beauty too.