Your right to remain Silent and Ernesto A. Miranda 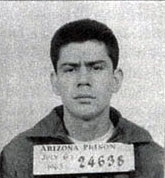 Phoenix, AZ---Ernesto A. Miranda was an armed kidnapper who tried at least twice to kidnap and rape young women on the streets of Phoenix, Arizona.

One of the cases involved a young box office girl at the old Orpheum Theater downtown. After finishing work one evening she took the 7th Street bus North to Maryland Avenue and got off that bus walking along the gravel road to her home.

What the girl did not know was that she was being stalked by Ernesto Miranda who was following her in his old gray Packard. Miranda was armed with a knife when he jumped out and forced the girl into his car.

Miranda had a little problem, he could not get it up and commit the act so he let her go. She called the police and Detective Carol Cooley and his partner Wilford Young were assigned to this and another similar case that involved a somewhat retarded 18 year-old girl.

Soon Miranda and his Packard became tangled into the investigation. Miranda was arrested, didn’t talk and was placed in a line up. The victims viewed the line up but could not identify anyone as their attacker. Cooley was understandably disappointed but pulled out his handcuff key and was about to free his suspect.

Curiosity got the best of Miranda and as Cooley approached him asked, "How’d I do?” A quick thinking Cooley replied, “Not so good Ernie, they picked you out.” Miranda sighed as he slumped into his chair and asked advice from Cooley. Cooley suggested Miranda cooperate because it would look better in front of the judge. Miranda confessed and some serious legal history was made.

Miranda was tried and convicted. His confession I have attached here below was no small part of the evidence.

Years went by as Miranda served time in prison and the U.S Supreme Court ordered his retrial without the confession. That was because of the failure of police to give adequate warning about self-incrimination and a waiver of that right from the suspect. The late, great and colorful Phoenix criminal defense lawyer named, John Flynn'strial work was responsible for the ultimate success of that appeal.

A young deputy Maricopa county prosecutor was told to dismiss the case by his superiors but refused. That was my dear long time friend, Robert K. Corbin. Corbin felt either a judge or a jury should let him go no matter how weak the case was, Corbin was not about to let a confessed rapist go.

Corbin began to read the file and found something interesting. Miranda was married, well sort of. You see Miranda lived with a woman, Twyla Hoffman who was listed as a common-law wife. Arizona did not recognize common law marriages and Hoffman could be interviewed, subpoenaed and required to testify against Miranda in court.

Corbin quickly dispatched investigators out to interview Hoffman at their old home in Mesa, AZ. Hoffman said Miranda confessed to her too. Since Hoffman was not a government agent Miranda had no self-incrimination protection from his ex-common law wife. She testified about that confession at the retrial.

Miranda was quickly convicted again and actually served more prison time than he would have if he never appealed his case.

Eventually Miranda was released from prison and found gainful employment autographing Miranda Rights cards for cops and lawyers he'd approach on the steps of the courthouse.

On a quiet Sunday night in 1976, while in a seedy bar, Miranda got into a fight with a knife wielding illegal alien. Miranda was slashed and stabbed to death. Police quickly arrested the suspect covered in blood. The police got out their Miranda cards and recited the required warnings to their suspect. The suspect asked for an attorney and the questioning ended. They were never able to convict anyone for Miranda’s murder.

Of course I’d like to help produce this as a feature film and I have the records as well as know many of the players of that story.

Pretty fascinating. I never knew the story behind the Miranda warning. Nice research.

You're right, this is a fascinating story. It's got justice, injustice, suspense and more than one twist to keep viewers intrigued.

Could we get Johnny Depp to play the flawed and tragic Ernesto? The screen play adaptation should let him have "second thoughts" about the rape rather than having trouble getting it up. Pitch it that way to Depp's agent (we'll rescripted it later if need be [wink!]).

But I think the story needs a hero or at least a "good guy" who can out last both Ernesto Miranda and his murderer, someone who can let the viewers see the story through his eyes, someone who can see the tragedy and the jungle justice play out so that "good" triumphs.

A PI might work but it's gonna be hard to develop the emotional connection from that perspective. (Sorry, Paul.)

But what about family? Did Miranda have a brother? His viewpoint (as a law-abiding citizen with a slightly bad, morally flawed sibling) would let "good" win out in the end as the brother sees evil doing itself in while (his) goodness survives.

Emilio Estavez would be a good pick for this key role. His compassionate face is just what the part needs.

For these essential contributions to making this into a record-setting blockbuster, I'll expect some compensation, of course, but only insomuch as I've supplied one small but essential, and therefore valuable, element.