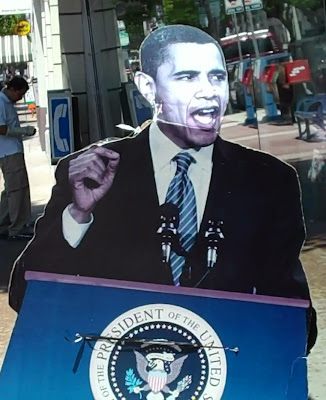 Washington, DC—After a disastrous eight years of George W. Bush (of Course his Democrat opponents were horrible too) Liberal Americans bought into the Hope & Change campaign of a mysterious fellow, Barack Obama who has accomplished little other than getting elected.

Those Liberal Obama supporters all wanted:

1. Our troops out of Iraq
2. Our troops out of Afghanistan
3. The insidious and evil Patriot Act repealed
4. The right of Gays to marry
5. To believe Obama's promises of Government Transparency
6. To believe Obama's promises that no American earning less than $250.000 per year not see their taxes increase by a single dime
7. An end the barbaric and unnecessary federal death penalty

Of course Obama has done nothing his Liberal supporters had hoped for.

Obama’s supporters really did not want and were less concerned about:

1. The Cap and Trade Taxation Scam
2. Nationalization of American businesses
3. The Hostile government takeover of health care
4. The cozying up with hard corps foreign Communist leaders
5. Destroying our National Defense CIA Intelligence program
6. Demoralizing American soldiers in harm’s way
7. Allowing Chinese and Russian officials access to our nuclear facilities
8. The runaway printing of money and the destruction of American currency
9. Moving dangerous foreign terrorists to American soil and providing free lawyers and all rights reserved for accused Americans
10. The control over media and their commentary

Even with a stacked Congressional deck of a super majority, Barack Obama has not given his Liberal supporters anything they hoped for.

Barack Obama has divided this nation pitting the government entitlement sucking population against hardworking taxpayers. Obama has rewarded corrupt businesses and organizations with billions of tax dollars and done nothing for the small businesses that employ vast amounts of Americans.

Will Americans discover the Communist attack on our country by that criminal cabal in our Whitehouse in time to stop the destruction of our way of life that has made America the envy of the entire world?

Barack Obama is no Liberal, he’s a genuine Communist despot on a mission. That mission must be stopped and its leaders arrested, tried, convicted and severely punished for their High Treason.
Posted by Paul Huebl Crimefile News at 11/27/2009 08:25:00 AM

Your right. Obama is a lying communist pig. He needs to be brought up on charges of treason and be impeached. He is the most Anti-American President ever!

1) Right-click your Recycle Bin and select Empty Recycle Bin. If it asks if you are sure, click Yes.

2) Right-click your desktop and create a New folder named "all memory and record of Barack Hussein Obama's existence".

3) Move that folder to the Recycle Bin.

4) Right-click your Recycle Bin and select Empty Recycle Bin. When it asks if you are sure you want to delete "all memory and record of Barack Hussein Obama's existence", click Yes.

obama is not just a Communist, he is a radical Communist, and some of his decisions appear solidly racist, just like his Pastors are. [Reverend Jeremiah Wright] The man is intelligent, intelligent at bullshitting, just like the rest of his south side Crookago fellow politicians, and the majority of the Crook County, Illinois politicians, where obama was spawned. The average american Voter is none too bright, and will easily buy into the well spoken rhetoric of an empty-suit from Crookago. These voters are really, too ignorant to be allowed to vote. Stricter requirements for voting in the U.S. must be undertaken by our next conservative president, if we ever get one again.. Otherwise, our well on the way to a Banana-Republic Country will go fully down the drain. I figure that we, as true Americans, will have one more chance, in 2012 to right the travesty of the last election. If it isn't corrected by then, it will be over forever for America, as a free Country.

As I have written over at Shaved's site many times, as well as, RueSt Michael, and ColdType, Obama is NOT a radical Communist.

A TRUE leftist would never had bailed out corporate America. He talks a good game but is still a tool of the rich.

As Crime-y has pointed out, Obama has broken the biggest promises to those on the left. The troops out of the MidEast is probably the bigggest lie.

Crime-y is wrong on one thing though. The left, for the most part, have remained silent. Especially the goofs on AirAmerica. They blindly follow Obama as Bush supporters blindly followed. That is why I did not support him last November, I knew he would not be a TRUE leftist.

The only leftists who have slammed Obama are the Democratic Socialists of America. Two weekends ago they held their convention in Evanston. All wore buttons which said,"Obama is no Socialist, but I Am."