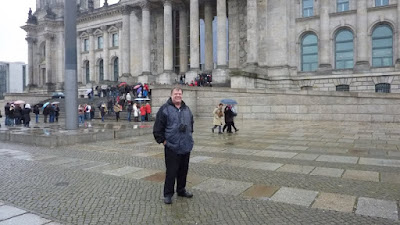 Berlin, Germany—It was 40 years ago that this draftee narrowly escaped combat in Viet Nam as a Light Weapons Infantrymen. I’d gotten orders to report to Oakland, CA for transportation to The Republic of Viet Nam. Miraculously that all changed when I got a new set of orders sending me to Germany.

40 years later I was invited to assist a film makker in Lausanne, Switzerland and traveled to Berlin and many places in between.

Somehow I wound up as an OJT medical corpsman in a busy dispensary. It was nice work for sure. I was clean, dry and happy for the rest of my military obligation.

Germany was still repairing damage from the war less than 25 years earlier. The fence around my barracks contained many bullet strikes that were still visible.

The exchange rate for a dollar was four marks and that made me very comfortable. Many Germans still did not trust the American occupying force. Parents were never happy to see their daughters dating American servicemen.

My fellow soldiers were not sensitive to the German culture and never bothered to learn the language. These young men were rarely able to land dates that were not bought and paid for with cash. The hookers for the most part charged $12.50 for their services.

I wanted no part of the hookers beyond voyeuristic exploitation. As an Army medic I gave more penicillin injections to my patients than I care to admit. Quell cream was the treatment I provided Africa-American soldiers who always got more than their share lice along with the SDTs.

I learned German immediately and went out of my way to understand culture and customs. That exercise paid off well in the form for delightful female companions. After a while I also gained the trust of the girl’s parents. Being able to read menus and communicate gave me special power my fellow American soldiers did not have.

I never understood why the Army did not require mandatory German classes for soldiers. In combat soldiers need to be able to communicate with the civilian population and helps in getting needed cooperation.

I loved Germany, the people and found their pride, work ethics and behavior was superior to that of my fellow Americans.

Today Germany has too much government, too many taxes and an immigration problem that rivals our own. Germans like Americans take the taxes and their own prosperity in stride. Gone are the jackets and ties every man wore all nearly all the time. The young women still dress to impress and they look so good.

In Germany the unwashed minority are the dreaded Turks. The Turks are gypsy like people who just don’t fit in the German culture. The Turks that immigrated into Germany didn’t seem to fit in Turkey any better.

Credit and debit cards along with technology have invaded every castle and hamlet. The same products sold here can be found there.

I was a Military Policeman in West Germany back in the early 70's. I have to agree that the people were much better dressed than the GI's. I liked that the women usually wore dresses and almost always were very attractive. The problem I had was that there was a portion of the population that had not yet been "Americanized" in their hygiene. Women with hairy legs and armpits that smelled like a farmer at the end of a long hot day plowing his fields. Whewww!! But all in all, the European women were much more attractive than their American counterparts, at least in my opinion. The best I have seen in my life were from Austria. All I can say is "Wow"!

45 years ago I was in Hanau. My first purchase was a bicycle. A half hour of more riding put me in smaller towns and away from the GI culture. While I never mastered German, I could get by. Good times. I also got to know the local Turks and got along well with them.

Ahhh, the Turks. What a bunch of thieving, stealing, lying con men those guys were. We had a bunch of them employed on our Kaserne working as dishwashers and other manual labor jobs. As an MP, on of our duties was to man the front gate to prevent access to the post from unauthorized persons. Occasionally we would search the Turks on their way out and it was like an old Three Stooges episode. They would have the inside of their coats loaded with stolen flatware, loaves of bread under their arms, and on and on. They say that the Turks are the most hated people in the world. After being around them for a few years I am not surprised.