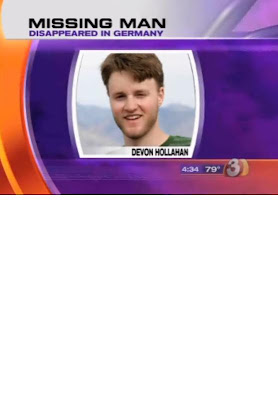 Frankfurt, Germany—It’s cold in Frankfurt right now and that great city can be a lonely place for any American that can’t communicate. Most educated Germans speak English but might not be as helpful to an American lad as they could.

Twenty-two-year old Devon Hollahan has been missing since Saturday where he was last seen at the Frankfurt train station.

Unfortunately Frankfurt’s uneducated criminals somehow think Americans are great ransom generators. These guys need to check out just how week the dollar is right now. Usually young women can become sex trade slaves so I suspect this case is different.

To my German readers please look at the video and call the Frankfurt police if you can be of assistance. Please watch the video below.