Why Restraining Orders Are Worthless In Stalking Cases 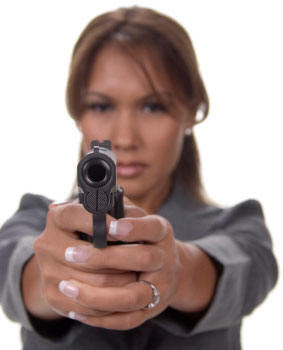 Orange County, FL-- Brevard County Circuit Court Judge Dean Moxley refused to issue a restraining order requested by a former Hooter’s waitress, Alissa Blanton, who had recently married. The judge felt that the petition was inadequate and ordered a hearing while declining the temporary order.

Now many people want to blame Judge Moxley for the woman’s murder. The blame is wrongly assigned here.

I have personally served thousands of restraining orders in similar situations. Despite serving the documents several people I served assaulted and even murdered the court protected victims. In one case I heard the gunshot as I served one man. He put a gun to his head seconds after I brought him the order.

The victims of stalkers are not always blameless. Some “victims” enable and even taunt their abusers bringing the violence on themselves. The mentally ill are victimizing the mentally ill.

There is a huge amount of abuse by people using the restraining order process to victimize the innocent.

Victims of real stalkers need to recognize when the problem is beyond the ability of the police and courts to protect them. Self help and sometimes relocating may be the only way to survive.

I have learned that when a stalker is beyond embarrassment he or she is really dangerous. Thankfully people on the edge don’t want their families, friends or employers to know about their behavior. Those people will stop with the mere threat of exposure.

We live in a free society and can’t deprive others of liberty because of fears of what they might do in the future. Victims need to report the conduct to police. Then they need to examine self-help solutions including obtaining firearms and the training to use them. Restraining orders are only made of flimsy paper. Law-abiding people behave without them. Dangerous people are never less dangerous because of restraining orders. Police rarely catch stalkers in the act enabling arrest. Our safety is ours, not the government’s responsibility.

Judge Moxly should not be a scapegoat for an unworkable program. Had he granted the order the result would have been the same.
Posted by Paul Huebl Crimefile News at 2/15/2010 12:42:00 PM

I always wondered why women have the mistaken belief that a restraining order is the answer to their problems. It is just a piece of paper. Nothing more, nothing less. In rare occasions the defendant will be spotted within the protected zone and because of the restraining order will be immediately hauled off to jail. Unfortunately there are times like the incident you mentioned where the defendant would not have been stopped even if a restraining order were in place. The poor woman should have armed herself with a pistol and made everyone around her aware of her situation so that she could have seen him coming. You cannot depend on the police to protect you from a psycho.

The above goes double for men.
70% of violent crimes are perpetrated against them.
Don't believe paper will protect from a psychotic woman or person.
Arm yourself and take necessary precautions, feminists are violet and irrational individuals.

No doubt restraining orders are completely useless -- it's just a piece of paper. Oftentimes when the stalker/abuser/murderer enters within the "protected zone", it is too late for the police to possibly arrive on time anyway.

This leads to the pressing question: should we get rid of restraining orders and enact other measures in their place? What about the stalker being immediately arrested and serving jail time upon evidence of their activities? Would that do more to protect the victims?

And you know what REALLY angers me? When victims get charged and convicted of "murder" in cases where they had no choice but to utilize self-defense. Oftentimes, the police are completely useless, and the victim to forced to kill their abuser/ potential murderer in order to preserve their own life. This is COMPLETELY justifiable; yet, our broken "justice" system views such victims as guilty of murder. Unbelievable.