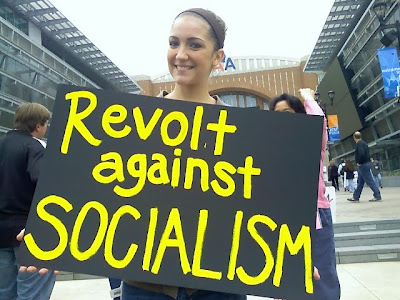 Fox News has become a default group support place for fear and loathing of all things Socialist. The message from Fox News is really mixed and confusing. From that Leftist Showman, Geraldo Rivera, the Liberal news Anchor, Sheppard Smith, the, regulate them to death style Progressive, Bill O'Reilly that believes he’s somehow a Conservative to that genuine Conservative, Glen Beck.

The Fox personalities are all over the political map. The ratings demographics provide true insight about how Americans really feel. Fox, a cable outlet takes the lead with the others far behind. That alone should send a loud and strong message to the politicians.

Fox News seems to be at odds with the Obama Administration policy in general. But, Glen Beck seems to be the only one who has really studied Political Science. Beck has a grasp of history and understands what’s happening.

The mainstream Republican Party has gone progressive years ago and does not have its Conservative identity anymore.

The Democratic Party has embraced Socialism and Karl Marx despite the massive failure of that form of government.

The Tea Party folks are a bunch of Conservative and Independent voters that have been disenfranchised and are tired of constant government extortion. The Tea Party people are victims of Bait and Switch promises of today’s American politicians.

The disgust Americans have for Congress and our politicians is at an unacceptable level. Obama has done one wonderful thing. He has caused massive educational efforts to understand the American process by the American people. Can we get rid of this despot before he destroys America?

The people do not like what they are learning because they want the American the founding fathers gave us not this Socialist Hope and Change manure they have been fed for decades.

The Republican Party needs to go back to its roots and expel the George Bush’s and John McCain’s that have abandoned Conservatism. It’s time for the small government, low tax mind our own business liberty lovers to get control of their own lives. The benefit would be a strong economy and good jobs for everyone.

Wars are always the product of Progressive Leftists that can’t accept the Swiss model of minding their own business. It is time for peace.
Posted by Paul Huebl Crimefile News at 2/16/2010 08:25:00 PM

The Tea Party is the new emerging party for REAL Conservatives. The Republicans have abandoned their base.

The Tea Party has become a viable third party alternative Paul and will soon be on the ballot in all 50 states. Maybe this is what it takes to affect change.

Glenn Beck is exactly right; the enemy is not the democrats or republicans. It's the Progressives that have infiltrated all aspecs of government. And don't be fooled by the "cute" term "progressive". There is nothing progressive about them unless you think their ideas of 'progressing' beyond the constitution and into socialism is progression. I've enjoyed Mr. Beck's excellent history lessons over the past few months.