Ignorant Press and Police Paint Hero As A Racist 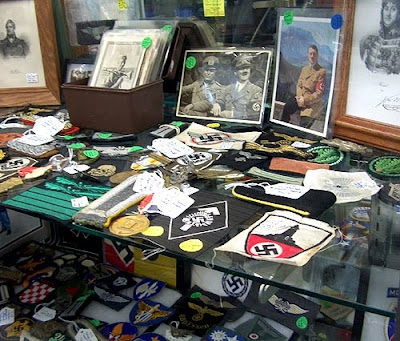 Chicago, IL—Ted Kozak is a hero on his way to Stateville Prison perhaps as early as Monday to begin serving a prison term for mere possession of two collector’s war relics.

They were two prized sub-machine guns of World War Two that put Kozak in conflict with Illinois law. Illinois has banned the two collector’s items in violation of the Second Amendment to the US Constitution. Because of the state ban The Federal government will not allow registration of taxable weapons creating a bizarre “Catch 22” problem. That is why Federal gun laws are virtually unenforceable in Illinois. The appellate court process must deal with this at some point.

Sun-times reporters Frank Main and Rummana Hussain really failed to understand this story and misinformed their readers in a huge way on the Kozak story.

The most egregious part of the Sun Times story was this passage, “Posters of Adolf Hitler, a bulletproof vest with a swastika patch, a German helmet and other Nazi items were found in his home, too.” Collectors of war guns also collect the other captured items such as flags, uniforms, medals, personal letters and photographs. American collectors celebrate the victory over National Socialism and it’s despots.

The celebration of WWII through memorabilia by military collectors is to cherish the victory over a vile government and political ideal. Thankfully the good guys won that war.

There are those stupid racists and morons that celebrate Adolph Hitler, but to suggest Ted Kozak is part of that is pure slander and to publish that is libelous.

Ted Kozak never once asked about the race or religion of the men, women and children trapped in burning buildings before he went in and rescued them.

Now that Kozak will be entering a prison system where 90% of the population is African-American the erroneous Sun-Times report has placed him in danger by labeling him as a racist.

I worked with Teddy until his arrest and he has saved numerous people of many races from fires and medical runs.Their article in the times is a disgrace and I hope Ted and/or his family files suit for their misrepresenting the correct and truthful information. All you have to do is look at the names of the reporters and can figure out why these racists wrote this about an exceptional firefighter!They also received their information from the cops who staged the unlawful warrant. What happened to cops and fireman working together since we work for the same city.They wouldn't want us to report every time they call us for cops that are involved in situations that clearly they are in violation of for many reasons!

Great article Paul. So nobody has to waste any time looking for these two reporters and the Sun Times Editors email addresses, here they are;

Please forward this story to everyone on your mailing list and urge them to cancel their Sun Times subscriptions. Also, make sure you tell them you are canceling because of the blatant lies published by Frank Main and Rummana Hussain, which painted Ted as a racist and contributed to the loss of freedom for an innocent man. Don’t forget to ask everyone to cc these Sun Times people.

This was done by one of the Area Gun Teams, I think they were from Area Two.

Wherever the gun team was from, when they kicked his door down, he thought they were Jamaican druglords out to get someone and had the wrong address.

Isn't it great that we live in a FREE country where things like this can't happen?

"The Federal government will not allow registration of taxable weapons creating a bizarre “Catch 22” problem."

So if Illinois or any other State decided to make blacks drink from seperate fountains and ride the back of the bus,thats ok??The Feds cant/wouldnt intervene?

Just a word to those in the peanut gallery.

The police are not your friend when it comes to guns and weapons.Most officers like being special and see the gun as power and it corrupts.

Outside of myself I do not know of any really SUPER PRO SECOND AMENDMENT officers.Im saying this as an insider.When push comes to shove,the office will pinch you to protect their pension and job.I'll never make rank.

As Paul has pointed out,if involved in a shooting,do not make any statements unless you have a trusted attorney present.

It's not an ignorant press that published the article, they knew exactly what the facts were. But the facts don't raise emotions, the facts don't "catch the eye" of the reader, and these are the the driving forces. Anything to sell the story, and hence the newspaper. The bottom line is - the bottom line, what sells is more important than any factual reporting. Reporters report, journalists, like novelists, write stories. The days of reporters are long gone.

If i was on the Jury a big Not Guilty, Cops should be going after the criminals not the collectors.

To the Area 2 gun team,may you burn in hell for all eternity.

Remember folks,you have a right to vote not guilty if you sit on jury.