Why Is Meg Whitman Running As A Republican? 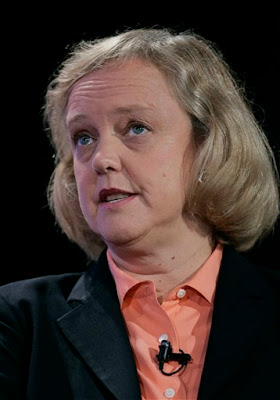 Sacramento, CA—Meg Whitman, billionaire and former CEO of EBAY is a George Soros style, Progressive Leftist. Whitman has aspirations to be California's next Republican Governor.

Whitman hates gun rights and wants taxpayers to pay for abortions and bigger government. Whitman is a pretender who will use her money to fund a campaign avoiding the Leftist agenda she supports. Uneducated voters will cast their ballot for the name they hear most often rather than issues.

Her money would be better spent on plastic surgery ! What a demonic hag!

Don't use your Paypal account to pay for guns or ammunition. Meg whitman does not care about your rights or what is legal. She will freeze your assets for up to six months an d be reluctant to give you your own money. Regular banks cannot rob you this way. Some of us wonder if her campaign is a last ditch effort to protect her own racket?