America Has Become A Police State 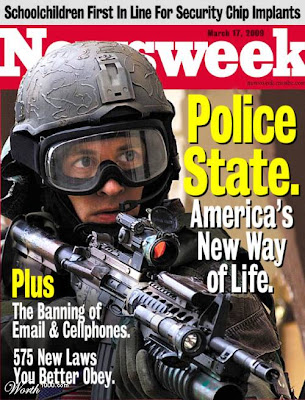 Americans have a short memory and those alive today don’t know what freedom was in this in this once great country.

Americans survived for nearly 175 years without identification cards or driver’s licenses. When you bought a new wallet it had a blank card you filled out so you’d get it returned to you when you lost it. There were no credit cards you used cash or checks with people and businesses that knew and trusted you.

Police could only determine who you really were by arresting you for a crime and fingerprinting you. If your prints were not already on file they had no way of knowing your identity.

It was not until the early 1980’s that you had to show identification to board a domestic flight. Illinois driver’s licenses came without photographs until 1977.

Social Security numbers were not a form of identification and were prohibited for use as such. Credit reporting and later law enforcement perverted the purpose of FDR’s Socialist retirement plan.

You could enter any building or form of transportation other than a jail or prison, including the Whitehouse without being searched like a criminal. Nobody dared suggest airline passengers or their luggage needed searching until the late 1970s.

Police waited sometimes hours to learn who the registered owner of an automobile was or whether it was stolen.

There was no video surveillance. There were no computers. All records were searched for in filing cabinets by clerks.

Technology has created a monster that has been accepted as necessary today by nearly everyone. Our crime rate was so much lower back when there was freedom.

Government was not in absolutely every aspect of our lives. Government was police and fire departments, schools, libraries, postal service and our national defense. Taxes were low and government was seen and not heard.

Government has been making laws non-stop and more often as a way to raise revenue to give us more government rather than promote public safety.

Adolph Hitler convinced the German people they needed more laws and stricter enforcement. The Germans bought into the argument of sacrificing liberty for better security. America has followed The Fuhrer's lead.

Imagine the panic of some air travelers I f the TSA vanished from the airports. The public has been fooled that the TSA is needed and actually provides protection.

Today you need some sort of license to do anything more than cut your own toenails.

Paul, if I'm not mistaken, it's a fallacy that one needs identification to board a domestic plane. It's HIGHLY recommended for expediency, but NOT a requirement.

You'll be put through greater scrutiny and a secondary screening for sure.

It's a little known secret that the TSA doesn't want to highlight.

You should try it out the next time you hit LAX for a trip back to Chi-town.

Paul great post. Except I am thankful that they search baggage before boarding airlines.

The TSA does to have the ability to detect explosive material in luggage. It's a waste of mtime and invasion of privacy. They pretend.

The whole purpose of the 9/11 event was to change our way of life by reducing freedom.It succeeded.