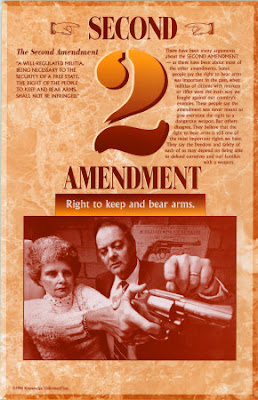 Washington, D.C. -- The high court said it will take up a case against the District of Columbia’s Draconian handgun ban. Yes folks, this is the first time case has come to this court in 70 years. A portion of the 1934 National Firearms Act was upheld in that deeply flawed 1939, Miller case where there was no attorney representing anyone but the government that sought to infringe on Miller’s rights to keep and bear arms.

There are two heavy factors that weigh in favor of ending the gun ban. One is that the law is abundantly clear on this issue and the other is that all but a handful of places in America don’t support such bans. The Second Amendment is in our Bill of Rights and most Americans are comfortable keeping that right.

The high court also knows full well that these bans have only disarmed the law-abiding and have facilitated Armed Robbery, Rape and Murder everywhere they exist.

In any even they will hear historic arguments, vote and assign a majority member the duty to express the court’s opinion.

There are seven diversified plaintiffs who sought to have the gun ban overturned, including the now top billed, Dick Anthony Heller, 65, an armed security guard, who brought forth his action after District after it rejected his application to keep a handgun at his home for simple protection.

As for the courts decision we will be waiting until June or so to see if we have more or less liberty and freedom in America. We hope that only the people and not the court will ever amend our Bill of Rights.
Posted by Paul Huebl Crimefile News at 11/20/2007 03:18:00 PM