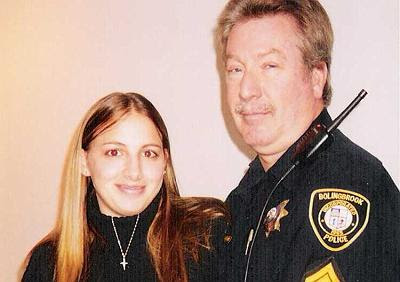 Bollingbrook, IL. —Stacy Peterson married a local police sergeant old enough to be her father and is now missing. This is marriage number four for Drew Peterson whose third young wife was found drowned in her bathtub. Neighbor's jaws are furiously flapping about that death in light of current developments.

Even though there exists no evidence of a murder society will ignore the real fact that this woman is no more than just another missing person.

When you have a case like this where foul play is possible you have to remember the number one rule about murder is that you only hurt the one you love. As the husband of the missing woman, Drew Peterson is automatically put under the microscope. The odds are great he is somehow involved in this disappearance. Of course now we hear of any and all real or perceived troubles this marriage may have had.

If Sergeant Peterson is involved and if this case is a homicide I fully expect the case to remain unsolved forever. The presumed person of interest here knows all the tricks and games to avoid detection. He fully expected to see search warrants served and exactly what police would be looking for. The cars, guns, computers would be taken for detailed examination. The floors and drains would be examined for trace blood and tissue. Land line, cell phone records and bank records would be sent out for analysis.

Of course everyone will argue that any running, ducking or other behavior cops and reporters don’t like are sure signs of guilt. CNN’s Nancy Grace will endlessly harp about this case just like she did with the still missing Aruba Spring Break Girl, Natalie Holloway.

Drew Peterson’s life is about to change for the worse this time even if this case remains unsolved. It’s time for him to retire and move far away from Bollingbrook or he will wish he had.
Posted by Paul Huebl Crimefile News at 11/03/2007 12:29:00 PM

I agree, it doesn't look good for him, but:

I give him credit for attracting a young,pretty girl when he did. If he was some 55yo rock star or liberal actor, nobody would say a thing about the age difference. Some aging Copper, fireman, carpenter,etc has as much right to a young beauty as anyone else. I'll
bet it was fun at first,it always is.
That aside, she doesnt deserve to be dead if the union turned to crap!
SIGNED: A 50+yo SCUMBAG......

Tribune said they had 18 domestic calls to their house over the years. Not a good omen.