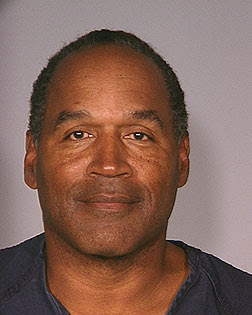 Tomorrow Simpson and his lawyer will be in court as the prosecution lays out much of their case for Armed Robbery Kidnapping and the rest of the charges related to that little get together at the Palace Station Hotel and Casino.

The prosecution’s burden is an easy one. They will put on just enough evidence to get this mess bound over for trial. There may be some limited cross-examination of suspects turned snitches and the victims. Hearsay evidence is admissible in this legal arena.

It’s a given that there will be a finding that there is Probable Cause to allow this case to go forward to a full-blown criminal trial that won’t happen anytime soon.

I just don’t expect this thug against thug mess to amount to much. The dark side of this case is that Simpson may get convicted not because of any other reason that people think he got away with a double murder over a decade in the past.

The truth here is that if the Juice was not involved this trashy case would have been dumped out with the garbage rather than clog an over-burdened court system.
Posted by Paul Huebl Crimefile News at 11/07/2007 05:06:00 PM