Does Phil Spector Have A Lawyer? 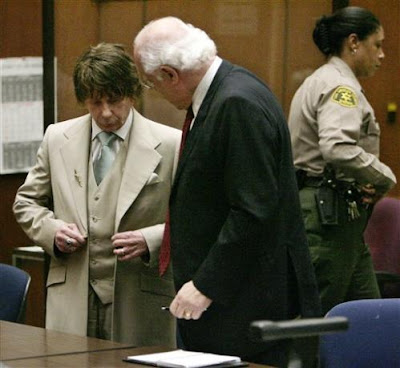 The answer is maybe. This morning veteran San Francisco criminal lawyer, Doron Weinberg was in court with the legendary record producer before Judge Larry Paul Fidler. Spector and Weinberg are in serious negotiations for representation in the upcoming replay of that murder trial. The appearance of Weinberg who traveled down from the Bay Area to the downtown L.A. court was a testament to that reality.

Prosecutors Alan Jackson and Pat Dixon were also in court. Notably absent was Donna Clarkson who seems never to miss a second inside Fidler’s court for every proceeding. Clarkson’s civil lawyer was there on her behalf.

It’s no secret that Jackson and Dixon are bracing themselves for loads of new impeachment material and under-explored legal issues coming from the defense to destroy their already razor thin case. They can’t be looking forward to part-two and neither is Judge Fidler. I think they all know that this case will never end in a conviction.

The defense has no choice but to start fresh with a new investigation, legal research and reweigh whether or not to have Phil Spector testify on his own behalf. I don’t count out Spector testifying even though it would give the prosecution a lot more time at bat.

The areas that the former defense team left insufficiently protected can be bolstered by what the old team did not have, hindsight.

The word, “trust” came up in connection with talk of Spector's representation. There can be no doubt that Phil Spector has given many people complete trust only to be disappointed to learn the hard way too many people are just not trustworthy. Spector’s has way too much at stake and there is no room for another violation of trust. The people on Spector’s defense team will have this man’s life in their hands. That’s an awesome responsibility.

On December 7th, 2007 a lawyer, and I’m betting that Doron Weinberg will step up to the plate and file his Notice of Appearance. Weinberg is a close confidant of noted appellant lawyer, Dennis Riordan, already retained by Spector to deal with some of the more challenging court motions.

Phil Spector and his young wife looked refreshed, alert and looking forward to a new day in court to get the injustice of this prosecution behind them.

Paul, do u own as many wigs as this guy?

When you are falsely accused of a crime you are innocent about, you would most likely not mind how much you need to spend for a los angeles criminal lawyer to help clear your name. Nonetheless if you can think straight given such circumstances, you would be able to realize the importance of not compromising the quality of service you get from a Los Angeles criminal attorney.

When you are falsely accused of a crime you are innocent about, you would most likely not mind how much you need to spend for a los angeles criminal lawyer to help clear your name. Nonetheless if you can think straight given such circumstances, you would be able to realize the importance of not compromising the quality of service you get from a Los Angeles criminal attorney.