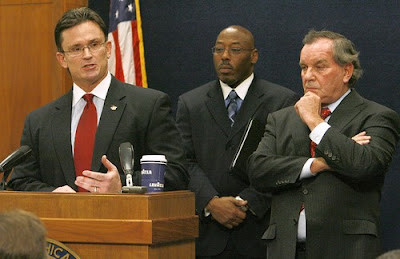 Chicago-Retired Special Agent In Charge of the Philadelphia FBI office, JP "Jody" Weis is Daley’s choice for the new Superintendent of the Chicago Police Department. Although Weis has solid investigative credentials he was never a street cop and does not know the job. He will fly by the seat of his pants while he collects $300,000.00 a year as a South Michigan Avenue desk pilot.

Weis is a civilian and an outsider as was the late, great Orlando W. Wilson who had experience as a street cop in his youth. Under Wilson police salaries tripled within two years. The police communications hardware was reinvented. Other changes included new blue and white color schemes for the beat cars, the trademark blue overhead light/s and that great mechanical siren with the baffle in it that made a really unique and identifiable sound. Most Chicago cops today have never heard that siren wail. Wilson brought us that trademark checkerboard field hat that instantly made cops identifiable from security guards and other police agencies. Officers with college educations were promoted along with the clout heavy boys.

What made Wilson a great superintendent was that he not the mayor or politicians ran the department. That was the way it was for a while but soon the likes of Vito Marzullo, Parky Cullerton and Fred Roti were really running the department again instead of Wilson. Wilson retired and things soon went bad for the rank and file cops.

The real obstacle that the new superintendent will have is Richard M. Daley who will continue his lousy micromanaging job of the department’s day-to-day activities. I just don’t anticipate morale lifting for the working cop after being at an all time low

I will wait and see how this all shakes out but I won’t get my hopes up. Oh and a Post Script. The appointment is pending the automatic rubber stamp of Chicago's ethically challenged Aldermen.

Did Daley just buy himself a new friend from the Justice Department in order to have a little influence with his own ongoing federal investigations?
Posted by Paul Huebl Crimefile News at 11/29/2007 05:02:00 PM

I'll make you a bet today , This guy will never be a leader of the CPD. Only in TITLE will he lead . Wait until he meets all the clout heavy bastards in the upper ranks. He's going to wonder how this Dept. ever survived with all these ranking asses . God Bless the CPD , They sure need someones help.

It will be "business as usual" as this non-street cop will not rule! He only has two ears and eyes.. just
like with O.W. Wilson, the few bad blue boys of the dept. will just "go around him".. It's a joke bringing in an outsider like this and a giant moral killer to the rank anf file thousands of good blue boys anf girls!
the old copper...