Putting Our Women At Risk 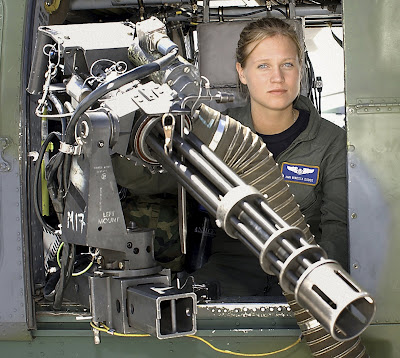 Here you see a pretty woman, no less than that hot, A-list celebrity who starred in a movie by that title. Manning this aircraft Mini-Gun is Vanessa Dobbs, a member of the 66th Rescue Squadron at Nellis Air Force Base, Nevada. Dobbs is a gunner for the HH-60 Pave Hawk. That’s a serious and deadly business that she is both strong enough and smart enough to handle. She is the first such woman to fill this role ever. Vanessa Dobbs is a pioneer for sure.

Call me a sexist dinosaur or anything you want, I just don’t care. I’m the first to say women don’t belong on routine police patrols or military combat. As a man I view my role as a protector of the weaker sex. I hold doors for women and surrender my seat on public transportation so they are more comfortable. I don’t for a second ever think special treatment for women is not deserved.

Our women have many legitimate roles in both the military and police forces, just not in patrol or combat. Women in such auxiliary roles as nurses and policewomen have distinguished themselves in emergencies time and time again. That does not justify placing these women at risk of losing their limbs or their lives. The sight of young women maimed or dead on autopsy tables because they were placed in danger while doing a man’s job for me is twice as tragic as when a man suffers that kind of fate.

When a nation sends women and children out to fight its wars that nation is both barbaric and in trouble. We are definitely in trouble both as a nation and society. The fact that these women volunteer for such duty does not make any of this right. I am the first to have only the greatest respect for women who seek out this kind of adventure and service to their families, neighbors and country. We as a society have a duty to protect these women from their own courage and have failed miserably in that duty.
Posted by Paul Huebl Crimefile News at 11/25/2007 03:44:00 AM

Male or female, if they qualify for the position and GOOD at what they do then they deserve to be there.

If you were a cop again and some A-Hole just shot you & you're bleeding, what are you going to do if a female officer responds?

There are some great and courageous ladies doing police work or are in the military. Many are well qualified for the task but that does not change my opinion.

I hated seeing Chicago police officer Irma Ruiz on the medical examiner’s table more than all of the dozens of male cops I’ve seen in that condition in my lifetime. Her children needed their mother more than Chicago needed this great gal working routine patrol.

It’s just uncivilized sending women into danger when we really don’t have to do that.

While I agree with your stance, I think that if you asked these women who volunteer for these dangerous jobs what they think, they would probably call you a male chauvinist pig and tell you to mind your own business. I've worked with a number of female state troopers over the years and can tell you that a few could whip both our azzes without really trying. I think some of these women have more testosterone flowing thru their veins that most men do. We are not "sending" them into harms way. They are asking for the chance to do these jobs and know the risks in advance. It still doesn't sit well with me, but I respect their wishes, and would only hope that those with small children think twice about what is more important, their kids or their jobs. Now, there are women who are police officers who are ultra feminine (like the girl in your pic) who may be good at what they do, but probably shouldn't be doing it. It's such a waste of a beautiful girl.

Danica Patrick does something every bit as dangerous as a police officer or a warrior and for a much more frivolous reason --- Money! Why?

Because people want to watch her drive fast and they are willing to pay for it. Her chances of being horribly burned, maimed or killed on the track are as good or worse (depending upon your point of view) as the female warrior's and in her case it's all in the name of entertainment. Is she and her popularity another indicator of a failing society?

You're swimming against the tide of current society Paul and as antiquated as the hoop skirt and steam powered locomotion.

Paul,
I understand your angst, and I agree with your mindset, but this is the way of the world now. They trained her to be a killing machine, she stepped up to the plate, and I have no doubt she will kill with the best of em. I must confess, though, I also find it a bit arousing; the thought of that gorgeous, warrior princess on that Gatling gun. Up on her tippy toes, hanging onto that killing machine, mowing down ragheads left and right, burst after 1000 round burst. Smoke hanging in the air , up to her shins in empty shell casings, Intense-focused. I can almost hear her as She mutters under her breath: "thats rights mutha f---ers, you want some more, I'm right here for ya, bitch, mommas goona give ya sume more", As her "gat" begins to glow

i believe that for jobs like firefighters and police officers that u cannot discriminate by hgt., wgt., gender, age or physical handicap. As long as they can do the job. the same amount of push-ups, sit-ups etc. if my house is on fire and they send in a person who can't get me out because he or she is not strong enough. because they need to fill quotas or can't discriminate is ridiculous. i am a police officer and much of the job is reason. u talk people into handcuffs. if you are a moron, other cops will recognize this and be reluctant to help u because u will get them hurt.

For tose that want 'equal rights,' its 'equal resposibility.'

I agree, but that also goes for the males as well..

It's fair enough for you to just state your opinion, but you haven't really made an argument. I'd like to hear why you believe women shouldn't be in combat. Historically, beyond the physical strength issue, women have been excluded from combat because a tribe can replace men killed in battle more easily in one generation than it can its women. One man can, after all, fertilize many women, but if you lose your women it becomes difficult to repopulate. That doesn't seem to be a big concern these days, but maybe it is to you. You mentioned a mother and the needs of her children--if a woman can't or doesn't want to have children, would she be an exception? I'd just like to hear your reasons.

...I hated seeing Chicago police officer Irma Ruiz on the medical examiner’s table more than all of the dozens of male cops I’ve seen in that condition in my lifetime...

Why on earth would you go to see any of your co-workers like that? Allow them some privacy.

When you’re a cop your duties often take you to the Medical Examiner’s Office. I’ve never intentionally gone to see a murdered copper but I have seen several over the years while working on other matters.

Most people don’t know that until the 1980’s Chicago cops were responsible for delivering the dead to the morgue. Today they contract those services out to ghouls working in private industry.