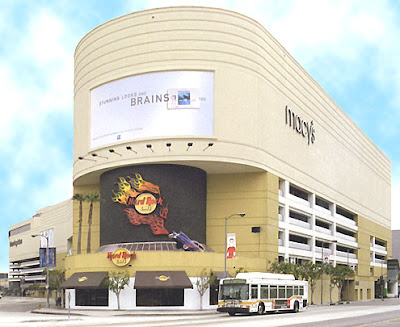 Malls are really soft targets begging for terrorist attacks. Many malls are designated GUN FREE ZONES where only violent criminals, deranged gunmen or terrorists can be found with weapons.

Our shopping malls are policed by poorly paid, trained and unarmed security guards. An unarmed security guard is nothing more than another hostage or victim. Citizens with real firearm training, and where allowed, concealed weapon permits are threatened with arrest should they shop while carrying a firearm for protection.

The only real protection malls have is use of the 911 systems and in Los Angeles getting a call through 911 is a time consuming challenge. Once a caller gets through the problematic 911 systems the wait for police response begins. That is compounded by serious tactical issues of police making entry to the mall that’s under attack.

Brain dead mall managers are never ready for the unthinkable and rely on simple luck as they hide from the dangerous terrorist invitations their Gun Free Zones present.

This holiday season I’d suggest that well trained Americans ignore the un-Constitutional local and state gun laws and simply carry a suitable defense firearm as an insurance policy. It’s better to have a fighting chance of survival than no chance whatsoever.
Posted by Paul Huebl Crimefile News at 11/09/2007 06:58:00 AM

Excuse me, but as a 911 operator for the LAPD, I feel the need to respond to this. The public calls 911 for everything...including loud parties, barking dogs, illegally parked vehicles, etc, etc. They call 911 from their cellphones from inside the mall to complain that they were not given the correct change on a purchase or to complain that the parking charge is more than they thought it would be. They give their toddlers in car seats the cellphone to play with, and the kids call 911 from the speed dial button. None of these situations is an emergency, and none of them warrant using the 911 system. However, cellphone 911 calls are airtime free, so people will continue to call 911 instead of the non-emergency number, tying up the 911 lines for the real emergencies, so please don't blame the operators for the delays in answering the phone, it's due to the call volume of non-emergency calls.

Also, the public just does not seem to realize that when one calls 911 from their cellphone, we are not equipped with a spot-on GPS system that will give us your exact location. We will get a nearby location based on the celltower, but that's about it. You can't believe the number of 911 calls we get where the person just says "Send the police over here now, it's an emergency!", and then hangs up...or they get verbally abusive when asked to provide their address, name, nature of the problem, etc....many times we get "Why do you need to know this? Just get the police here!" Folks, we do want to send the police to help you, but you need to help us help you - stay on the phone long enough to give us an address and a brief description of the problem.

I am no fan of the public, their ignorance or their stupidity. People use the 911 systems like their personal assistant, slave or just for fun.

Okay now that we’ve cleared that up we need to have a real emergency communications system for real emergencies. That’s the job of government and that a job they can’t or won’t handle.

Is it any wonder that folks use 1911 instead of 911? In case you don’t know 1911 is the venerable model number of a Colt .45 semi-automatic pistol. I never have to worry about 1911 being busy handling calls about cats in trees or loud parties. I don't have a second trigger for Spanish either.

Let’s hope the Supreme Court reaffirms our right to keep and bear arms in the upcoming Heller (Parker) case vs. D.C. case.