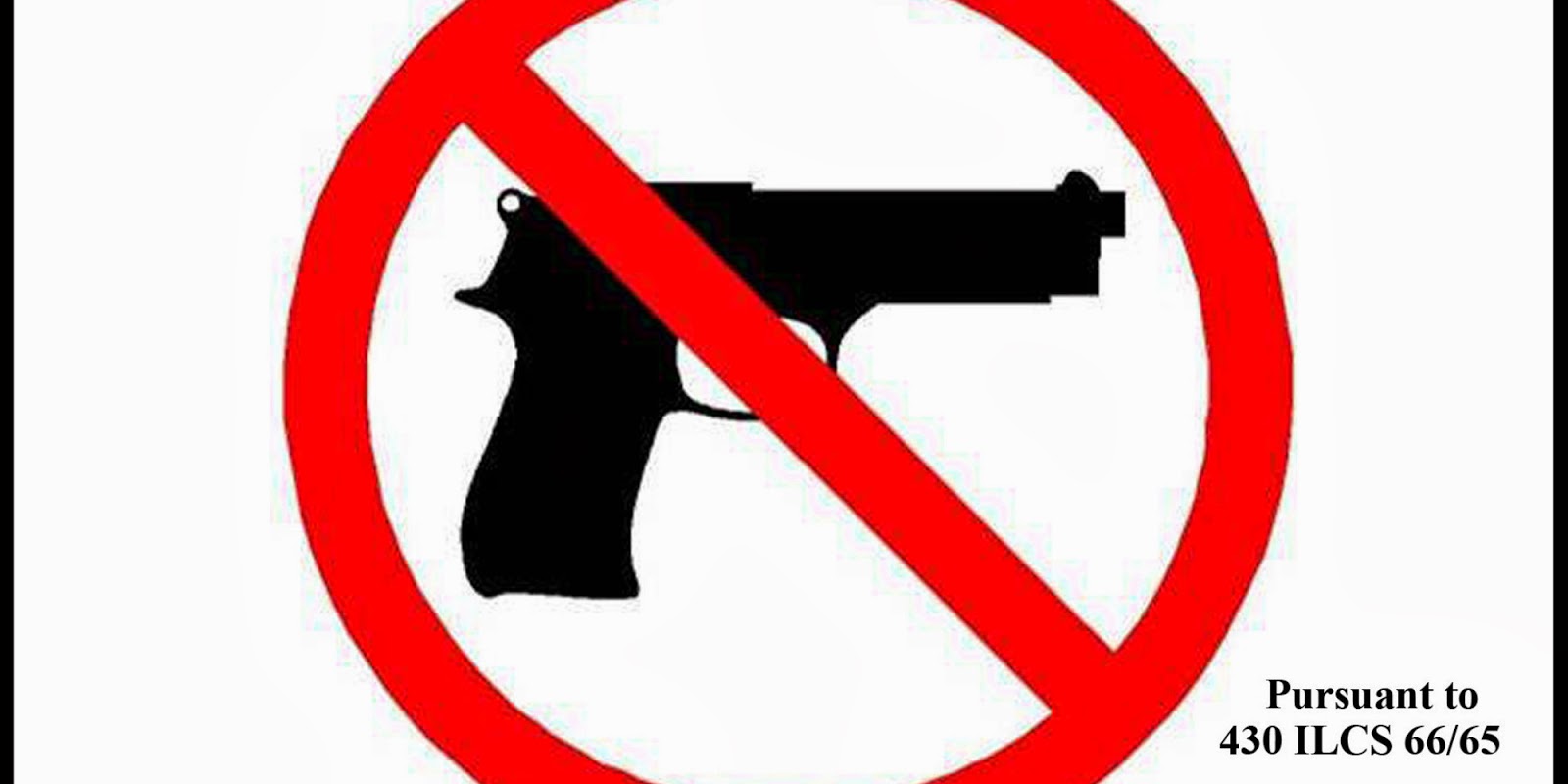 Chicago, IL—As thousands of concealed weapons permits are being issued here some people running local businesses apparently fear anyone law-abiding that is also armed.   They are putting up signs prohibiting guns.
Illinois politicians opposed to gun rights have offered up a feel good solution allowing businesses to ban guns on their property that’s otherwise open to the public.   Some of the businesses are following corporate mandates others are ignorant and perhaps frightened by the idea of guns.
Of course all armed and dangerous criminals can be counted upon to ignore the signs.  Adding to the madness the business owners utilizing the signs are telling criminals that they can rob, kill or rape without encountering armed resistance!
These days in most safe appearing neighborhoods finding armed security guards not involved in money transportation is nearly impossible.   No local business would dare begin TSA style frisking.  If they tried doing that, it would guarantee a trip to the Bankruptcy Court.
Putting up the signs sends a political message that will bring more than enough customer loss and economic damage.   Frankly you have a choice and can avoid doing business where such signs are displayed.   It’s simply one more good reason to use amazon.com, skipping the brick and mortar Gun-Free Zones altogether.
First and foremost concealed weapon arrests are made almost exclusively during vehicular traffic stops.  Occasionally some arrests are made incident to unrelated arrests for shoplifting, street disturbances or trespassing cases.  Shoplifters that carry guns find out the hard way that packing heat may raise a misdemeanor offense to a much higher-level felony crime in many jurisdictions.
Thankfully none of us have ever seen police enter businesses and restaurants and begin searching patrons.  There is still a shell of the Fourth Amendment protection from unreasonable search and seizure preventing that kind of police nightmare.  The fact is entering a sign posted business with a No Gun sign carries almost no risk of discovery.  That may and should change with a breach of the peace.
If a permit holder were discovered armed, they’d have to prove that the sign was not obstructed from view.  Often I’ve seen the signs posted on glass doors that were actually propped open and not facing where people could reasonably be expected to see them.  Did the patron enter behind a large person blocking view of the sign?
One thing we can all count on thugs, robbers, rapists and killers will never obey these or any signs or laws.   Why put yourself at risk simply to obey a stupid sign?
If there was the rare situation where a violent crime occurs like a robbery and a patron was armed and actually displayed or otherwise used the firearm judiciously I think an arrest would be highly unlikely especially of a violent crime was halted.
The signs have no real impact but to divide businesses from customers.  A concealed weapon permit guarantees that the holder is a sane and law-abiding citizen.  Felons, the insane and otherwise troublesome people cannot be barred from businesses without fear of bringing the wrath of the ACLU and government regulators.
If you have a concealed weapon permit and you are armed you need not fear arrest provided that you are not intoxicated or disorderly.  If something happens and you either display or otherwise deploy your weapon do not answer questions but instead ask for a lawyer.
My advice is to not patronize any business with these ridicules signs.  If for convenience, you feel the need to give them business they don’t deserve you should simply ignore the signs.  Never let some politician or law deter you from protecting yourself or someone you love.  Be safe, not sorry!

Amen to that Paul. Stores should be putting up Concealed Carry Welcome signs as then we would know what places are safe to shop in! I'd actually love a non-trendy concealed-carry coffee shop that has real magazines for patrons to read.
Hey, not a bad idea!

another tactic is to give those businesses that are not gun friendly a bad review on Yelp.I feel this tactic is completely valid as they put your life at risk and violate your rights.

As an LEO I'm exempt but nonetheless, if that sign is posted I refuse to go in.