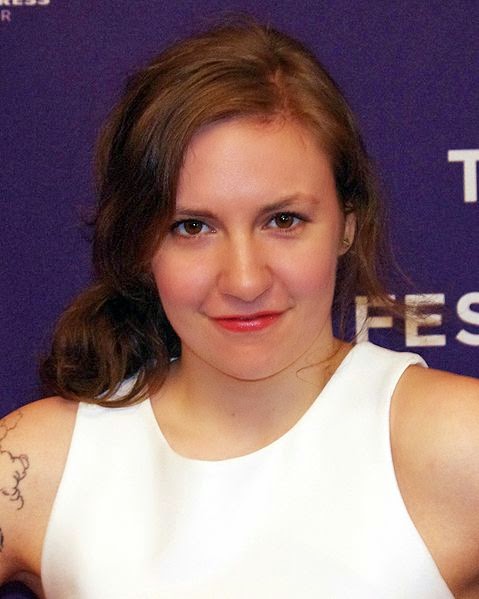 New York, NY—Watching Saturday Night Live tonight introduced me to Lena Dunham.  I heard the name before but was not quite sure where. I must have spent too much time in my cave.  Dunham is a tattooed and somewhat pudgy gal that most would dismiss as a potential leading lady of most films.
I was curious so I investigated to learn why this 27 year-old girl was hosting SNL.  I watched her skits and she seemed somewhat talented.  Where and how did she get her breaks I wondered?  Hell I have socks in my dresser that are older than Dunham!
It turns out that Dunham took a route to stardom I was taught to avoid like making short films.  I was taught to patiently wait for an agent or manager to discover your acting skills and make you a star.  That is now so “old school” and nearly always leaves the blood of hopefuls on the, Boulevard of Broken Dreams.  Most of the A list actors are not also writers and directors.  They get a lucky break, an agent and some good roles.
Dunham took another more progressive and productive route.  Among other things apparently the 2012 successful HBO comedy series, Girls which is a creation of this talented lady.
Dunham obviously learned important writing skills in college.  Afterwards Dunham got involved writing, producing, directing and acting in short films.  Instead of stalking agents for representation she used the power she had over her own projects to cast herself in the lead roles.
Dunham gathered her mother, sister, friends and associates and moved forward like a speeding freight train making films.  Social media played no small part in her self-promotion.  That effort resulted in the important talent agents stalking her!
Dunham entered her projects in various film fests.  She won Best Narrative Feature at the SXSW Festival.  She cast herself in her own little projects as she entered her films in numerous competitions.  Later she wound up with two coveted Golden Globe Awards and numerous other honors.
One film schoolteacher of mine never mentioned that Alfred Hitchcock and Rod Serling succeeded with easy to produce inexpensive short films.  Half-hour shows were really 20 minutes with room for 10 minutes of commercials.  Hour shows simply doubled everything.  You never saw expensive sets, special effects or major film props like you do in feature films.  Great scripts and actors carried everything.
My acting coaches never expressed value in short films beyond putting clips on your acting reel.  It was more about getting cozy with casting directors and putting on showcases.  Of course that meant paying for the privilege to play.
Today you can go to the nearest Best Buy and purchase better and substantially cheaper equipment to make and edit full color films for a few thousand dollars.
Last but not least On October 8, 2012, Dunham signed a $3.5 million deal with Random House to publish her first book, an essay collection called Not That Kind of Girl: A Young Woman Tells You What She's Learned.
Dunham has taught me that becoming an entertainment mega-star and millionaire is possible if you just believe in yourself.  Is there still hope for an over the hill Hollywood hopeful like me?  The answer is, yes!
Posted by Paul Huebl Crimefile News at 3/30/2014 12:08:00 AM

Girls don't like to be called pudgy! Thick maybe acceptable..

Why do you care about these people? Their value system flies in the face of yours.

Why do I care about these people you ask? Many do have a different value system than mine. We are all different and sometimes it’s difficult to deal with. However we can find commonality with everyone on this earth if we look for it.

I’m sure I don’t subscribe to Dunham’s political beliefs. However she has conquered Hollywood on her own terms. She democratized a corrupt system of agents, producers and gatekeepers that inhibit talent and their ability to make a living.

Hollywood’s system restrains trade and engages in anti-trust. It’s a definite form of white-collar crime and Dunham beat them. I have to admire and recognize that.

Last but not least can’t show political opposition a better way if we don’t extend simple kindness and make an effort.

I hope that answers your question