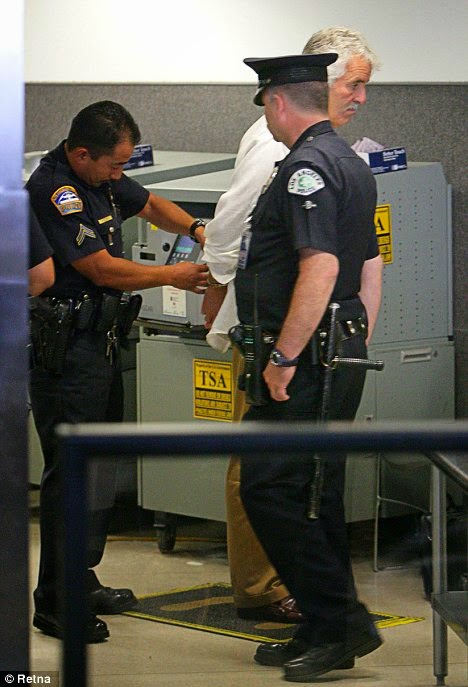 Chicago, IL—It happens again and again, a forgetful or preoccupied traveler is found to have a firearm in a carryon bag at Midway or O’Hare Airports.  Zero tolerance kicks in and the hapless traveler is hauled off to jail.  They are forced to miss their flight along with the weddings, funerals and business meetings they planned on attending.
That happened to the late retired Chicago cop and actor Dennis Farina seen in the above photo being handcuffed by police at LAX in 2008.
Everyday thousands of  travelers are similarly found with lotions, potions, perfume, liquor or various objects that just appear harmful.  Thousands of other forgetful or preoccupied people with the prohibited liquids don’t face arrest, just the confiscation of their sometimes-expensive property.
The point is that no person with criminal intent would ever knowingly place a bag on a conveyor belt for TSA inspection that contains a gun!  We all know our bags are sniffed, searched and x-rayed!
Passengers are permitted to transport their firearms unloaded in a hard-sided locking case provided they inform the airline ticketing and checked baggage agents.  There is inspection and tagging the firearm involved.
You’d be surprised to learn that not all airports are the same.  It depends more on local laws, attitudes and their concerns about fundamental fairness.
If an intended passenger is found with a gun in Phoenix, Denver or Jacksonville chances are they will be told to remove the gun and make proper arrangements for its disposition.  They are allowed to hand over their gun to friends, relatives or place it in their automobile trunks without being arrested or prosecuted.
The same conduct at most airports brings jail, bail bondsmen, defense lawyers, prosecutors, judges, disgrace and sometimes-horrible publicity.   Even if a passenger were to win in court the over-all financial damage can be staggering to some people.
Sometimes criminals are forgetful too.  I’m talking about those people that prohibited by law from possessing firearms and those with stolen guns or ones with defaced serial numbers.  When that happens arrests are appropriate and reasonable.
Why would we want to clog our jails and courts with people that are in no way a threat to anyone?  Why would we want to stamp the Mark of Cain (criminal record) on some traveler destroying their current or future business and professional licenses?  Why would we want to criminalize forgetfulness?
This problem of unreasonable arrests can be addressed by either state or federal legislation.
The federal government currently has the ability to assess a civil penalty of up to $10,000 for violations and that issue also deserves revisiting and review.
Zero tolerance is more suited for Communist, Nazi or similar Fascist governments, not that of a free nation.  Above all, we have a right to keep and carry firearms that’s spelled out in our Constitution.

All Americans deserve fairness and the benefit of the doubt when it comes to matters or crime, courts and justice.   Arresting some otherwise law-abiding person simply for pure forgetfulness is nothing short of government tyranny.

Once the authorities know the admirable crudentials of someone as Farina he should just be let go. He is on equal level as a sky martial on that flight, a second protector.

No harm no foul.But the system is ruled by attorneys bent on making a buck.It also supports Irish Welfare.

Those two cops in the picture should hang their heads in shame. Arresting Dennis Farina, a former Chicago cop, for simply forgetting he had a firearm in his luggage? I sincerely hope that what goes around, comes around for those two knuckleheads, and that they get a taste of their own medicine one day. Asshats!