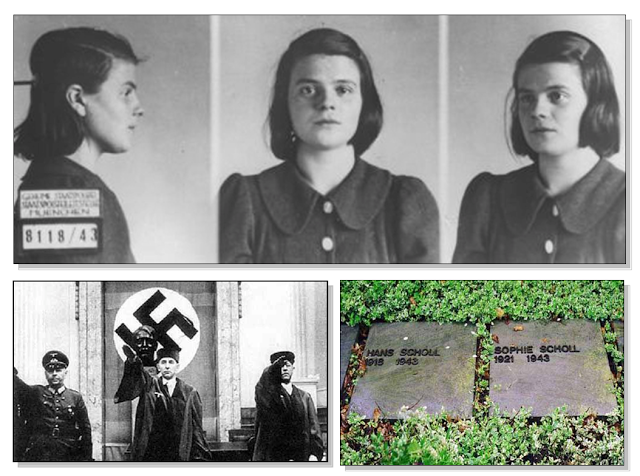 Munich, Germany—One of the more compelling true stories of wartime Germany is that of young Sophie Scholl and the organization known as the White Rose.
The White Rose was a small university based peaceful Nazi resistance organization committed to revealing the evil state secrets of the Third Reich.  They exposed the cruel murders of mentally ill children, Jews and prisoners of war.  They did so by writing, printing distributing leaflets exposing the shameful Nazi crimes.
In 1943 Sophie, her brother Hans Scholl and a friend, Christoph Probst were caught in the act of distributing hundreds of leaflets at the University in Munich.  They were arrested, tried convicted and executed for treason.  Eventually four other members were executed too and others imprisoned.
What makes Sophie special was that she fought tyranny and demanded that she not be treated better than her brother and friend Christoph.  The young trio were allbeheaded on a guillotine.
I want this film remade in English.  I’d cast Sebastian Koch as Gestapo Inspector Robert Mohr and Christian Berkel as Judge Roland Frisler. Additionally I'd cast Carice van Houten as Else Gebel, Sophie's cellmate at Stadlehiem.  A casting dragnet should be cast to find a wonderful 21-year-old actress to play Sophie.
The actors should speak in English with authentic German accents and it should be filmed where it happened.  Needless to say I'd love to personally be involved in this production.
This story is compelling, heartbreaking and a monument to the courage of these youngsters.
Posted by Paul Huebl Crimefile News at 3/25/2014 03:30:00 PM

I couldn’t agree more – this would make a fine movie and be an inspiring story for any young person BUT Hollywood would never do it. It isn’t politically correct.

Maybe Germany would do us the favor of making such a film.

Maybe Germany would do us the favor of making such a film.