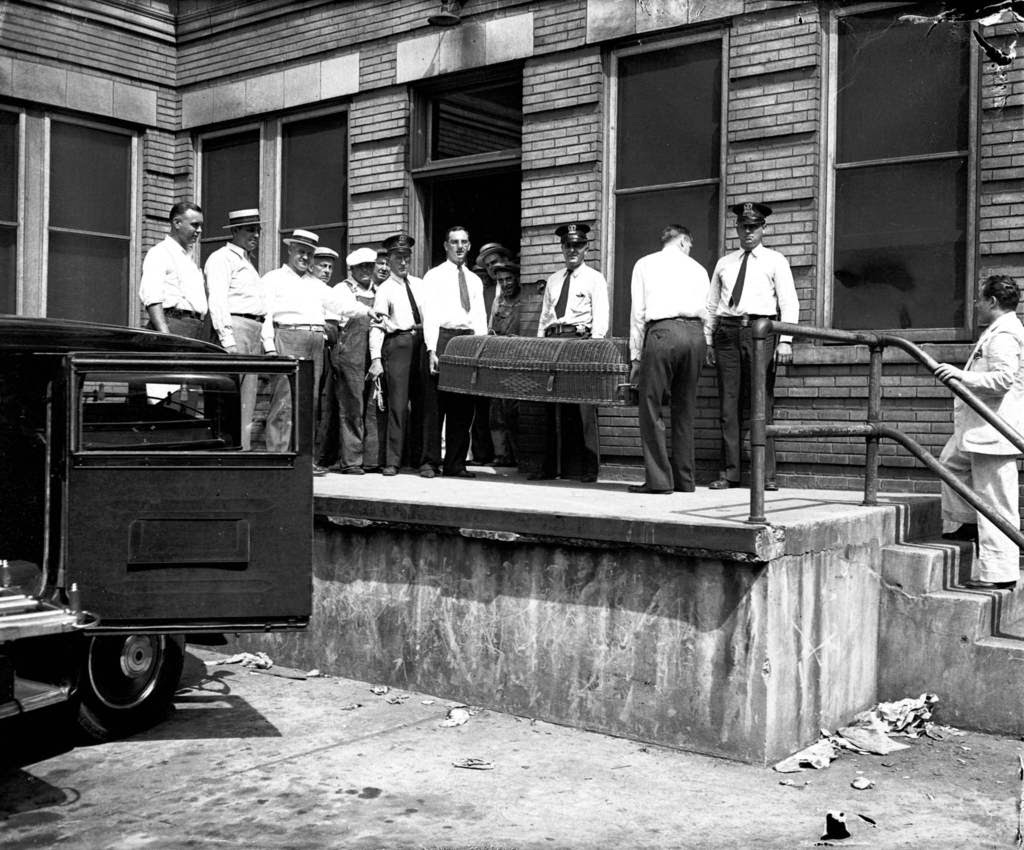 Chicago, IL—In the early 1970’s I was assigned to remove murder suspects from the Cook County Jail and take them to the Cook County Morgue.   The old Morgue seen above in rare photos was located at Polk and Woods Streets on Chicago’s West side.  It was near the Cook County Hospital.  It has since been torn down.
From 1960 until 1976 the elected Cook County Coroner was the late Andrew J. Toman, MD.  Various forensic pathologists appointed by the Cook County Board have since replaced Dr. Toman.  It is now called the Office of The Cook County Medical Examiner.
In those days Coroner’s Inquests into the manner of death were held.   They were presided over by a Cook County Deputy Coroner and a jury of six men hearing the testimony and reviewing the complicated evidence determined if the death was a crime or from some other means.
Homicide detectives would provide testimony and the pathology and toxicology reports were also entered into evidence.  Anyone in police custody charged in connection with the death was asked to testify subject to standard Miranda warnings.

The Jury was comprised of men between 75 and 90-years old.  They were professional jurors that used the paltry jury pay to supplement their retirement pensions and Social Security.  They wore old tattered suits and one of the men had a hideous looking fake hand.  It was made out of wood and covered with a black leather glove.  One of the fingers was torn and the wooden index finger was exposed.  They seemed to enjoy their duty and sense of importance.

Often I’d eat my carry out lunch inside of the jury deliberation room while the elderly fellows were deliberating.  The jury members played cards and talked sports rather than the business at hand.  They would soon signal signal that a verdict was reached and the foreman would dutifully recite it on the record.  The reality was a secret hand signal from the Deputy Coroner to the jury foreman determined just what the verdict would be!  It was anything but a dramatic scene like the one in that great film, Twelve Angry Men.
The jury foreman recited the Murder verdicts this way: “We the jury, sworn on the remains of (name of the victim) find this occurrence to have been murder and we recommend that the defendant now in police custody be held on a charge of murder until released by due process of law.”
Coroner’s Inquest verdicts were never binding upon prosecutors and they were considered duplicative and unnecessary.  Prosecutors demanded to have the last word on prosecutions and too often the Coroner’s jury disagreed with them.  The new laws of the Medical Examiner system eliminated the Inquest proceedings altogether, at least in Cook County.
In the case of police justified killings the cops were required to testify despite their right to claim protection against self-incrimination.
Laws and attitudes have changed over the years along with the press and public’s right to know exactly what was happening behind the walls of this local government facility.
In 1934 when FBI agents and East Chicago, Indiana cops at Chicago’s Biograph Theater on North Lincoln Avenue gunned down the infamous fugitive gangster, John Dillinger the press and the public had the absolute right to view Dillinger’s remains.  He was put on display for the morbidly curious.  That would not happen today under present laws.
Prior to late 1976, the office of Cook County Coroner existed and operated under laws that have changed considerably.
As for my exposure to forensic pathology, I sat through hundreds of inquests and during breaks I’d go downstairs and watch the autopsies. I can say that I’ve closely watched between 700 and 800 of them.
I’ve seen every conceivable kind of death up close and personal.  Unfortunately they included murdered cops, a very pretty friend and neighbor who was stabbed to death along with two friends killed in car accidents.  Then there was a high school acquaintance shotgunned to death by police when he was caught burglarizing a supermarket one night.
That along with my experience as an Army medical corpsman this was quite an education.   As a police or private investigator understanding related medical documents and testimony is often very important.
The various changes of the law involving the Coroner/Medical Examiner came as the direct result of a Federal Grand Jury probe of the infamous December, 1969 Black Panther Party Raid that resulted in the justifiable deaths of Fred Hampton and Mark Clark.
During the many years of litigation that followed the raid, practices of the Coroner were criticized and some politicians demanded reforms. That's what led to the changes.
The autopsy protocol I became familiar with was long before the fear of HIV and AIDS.  Rubber gloves were used for the most part, but not mandated.  Masks and eye protection was rarely used unless the remains were really over-ripe.
The bodies were kept on somewhat clean stainless steel gurneys and the remains were covered with plain brown butcher paper.  Standard autopsy tables with running water were used and above with the lights were microphones for dictation by the attending pathologists.
The head physician was an elderly man, Jerry J. Kerns, MD who sat at a desk with his back to the autopsy tables.

The bodies were first measured and weighed with a floor scale.  The weight of the gurney was then deducted from the total weight.
The autopsy assistants or dieners (their proper title) were all exclusively African-American males.  They were political patronage workers with limited educations including some that were functionally illiterate.  Let me defend these men because they all knew human anatomy really well.  They taught me a lot!
The dieners could trace bullet wound tracks through organs and tissue better than the pathologists and could easily recognize an internal organ that was in anyway abnormal due to size, shape or color.  They could tell an adrenal gland from a pituitary gland in a split second.
The pathologist would look at the remains and dictate what he saw and return to his desk.  The dieners would usually open the body, and rib cage.  Ordinary tree pruning shears are the choice tool for quickly and cleanly cutting the rib bones away from the breastbone.
They then would cut the scalp pulling the forward and anterior flaps down exposing the skull.  They would use a Stryker cast saw to cut the top of the skull so the brain could be easily removed.  It was at that point the pathologist would take a look and either take over or simply tell the dieners what was needed.
The internal organs were all removed one at a time, weighed and sectioned using chef's knives and the samples were preserved in containers for further examination.  What was left including the brain, was placed in a plastic or rubber trash container lined with a large plastic bag.

The most unpleasant part of the procedure for me followed the opening of the stomach and the examination of its contents.  The pathologists would often sniff the contents trying to determine what and when was the last meal.  It's exactly like examining vomit.
When the autopsy was concluded the dieners would replace the brain with a large wad of cotton and the scull cap was repositioned.  The scalp was pulled back over and stitched with a large upholstery needle with butcher string.
That large plastic bag filled with the viscera was stuffed into the open body cavity.  The ribcage was closed and the breastbone laid on top were it belongs.  The Y shaped body cavity incision was closed using the same needle and string as the scalp.
The pathologist would dictate the rest of the report with incredible speed of a rap artist.  At that point they’d rinse off the table and various tools.  Odors were kept under control with lots of liquid Pine-Sol detergent.
During obvious homicide related autopsies it was routine for the homicide detectives to watch and actually make the recovery of bullets and other similar projectiles.  They’d transport that evidence to the ballistics examiners at the various crime labs.   They'd also take pictures of the remains and various wounds.
Today the dieners are now formally educated technicians, the butcher paper has been replaced with heavy duty plastic and everyone wears protective gowns and faceguards.  The physician is present throughout the examination.
I wish to thank the late, Jerry J. Kerns, MD and Deputy Coroner, Anthony J. Scriaffa along with some very capable dieners for their assistance in this important part of my education.  I also must thank my wagon partners, most notably the late, L.C. Johnson for guarding the prisoners while I was learning one floor below.  I have no university credit hours or diploma to show for this, but what an amazing education.

What an unusual police assignment. Without the inquests you'd have never had this exciting expierence.

Paul, you brought back so many memories. I was in the old Area Six Homicide/Sex unit. I testified on numerous cases and remember you well. I have forgotten so much but I'm begging to recall things like the juror with the wooden hand and Tony Schriffa. Dr. Kerns was our Dr. Death. RM

Dr. Jerry Kearns was my grandfather and I am trying to find out more about some of the cases he worked on and more about him. My dad was very respectful and he didn't tell me too much about the cases his dad worked on because some of them seemed quite grim. I found some negatives on eBay of my grandfather and had them printed for my dad for father's day and his birthday, which he really enjoyed seeing again. My dad would tell me someday ask my about "x" case; but never would tell me too much. My father has since passed and I am still curious. I am not sure if you still check this blog; but in case you do, I wondered if you had any advise on learning more.

Dr. Jerry j. Kerns was already elderly when I met him. He and his boss Andrew Toman took a load of unnecessary criticism from some politicians and media.

What eventually brought about his forced retirement was fallout from the case of the December 1969 Black Panther raid where Fred Hampton and Mark Clark were killed.

The Leftist assholes and cop haters did not like the findings of Dr. Kerns and claimed the pair were murdered in their sleep.

For several years they whined and screamed in a financially motivated scam to destroy Toman and Kearns. The media whipped the public up and the appointed Medical Examiner system replaced the elected Coroner at least in Cook County.

Dr. Stein was a bit of a grandstander and publicity hound. The roles of the autopsy assistants were reduced and physicians were required to do the actual labor rather than just supervise.

We could argue that Dr. Kearns was too old to practice. He was hard of hearing and sometimes misunderstand the lawyers questions when he testified on the various murder cases. Deafness was the reason not senility.

I found Dr. Kearns to be kind and caring fellow who was respected by the staff.

Two of his sensational cases involved murdered daughters of The late Senator Charles Percy and TV personality Irv Kupcinet. Neither case was ever solved.