Too many American Politicians are Not Fit to Live 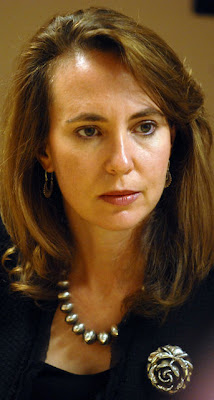 Tucson, AZ--Gabrielle Giffords is a Democratic Congresswoman who fearlessly represented the voters that sent her to Congress. Unlike so many politicians she’d spend time with her constituents and hear their concerns, gripes and hopes. She was respected and even loved by both Democrats and Republicans. If all politicians in America were like her there’d be no nasty divide as we have seen in the last two years. Conservatives can agree to disagree with Giffords and do so with a genuine smile.

A pathetic drug abusing loner with a long history of exhibition of mental illness symptoms falsified a Federal (#4473) gun purchase form got a gun and went on a killing rampage. The carnage is heartbreaking to say the least. America has been paying dearly for neglect of the mentally ill for a long time.

Today we have many incredibly arrogant politicians that believe they have carte blanche authority to attack the Freedom and Liberty that made America great. They wantonly assault our free market system, its economy and our way of life. They are wrecking the Constitution they swore to defend and protect. Their goal is to enslave a significant portion of our population. They simply want to replace our system of government with that failed Socialist model like Adolph Hitler, Joseph Stalin and Mao Zedong envisioned.

It’s unfortunate that millions of Americans really don’t understand the benefits of Freedom. They don’t know how governments are the most prolific killers of their own people throughout history. The ignorant are easily mislead and exploited by corrupt Socialist politicians.

Those politicians that are scrambling to curb Freedom under our Bill of Rights on the backs of the Tucson massacre victims are beyond despicable. They’re deepening the divide and open wounds in America. These people are threatening our very peace and patriotic Americans can be counted upon to once again shed blood in the name of Freedom. These treasonous politicians want and may get a Civil War.

We should be using the tragedy to find common ground as we come together as a nation. We need to reach out to the disenfranchised in our midst and help them realize the American dream. Threatening freedom is no different than throwing gasoline on a fire. There will be no negotiation on our freedom.
Posted by Paul Huebl Crimefile News at 1/10/2011 12:04:00 PM

No negotiation on freedom! Beautifully said!

I wish I could buy you a beef sandwich and a beer.

Found out the shooters family and the shooter are Jewish. They go to the same Jewish congregation as Gifford! The Rabbi is on a first name basis with everyone in this very small congregation. So why has the Rabbi been silent? Why is the Rabbi letting the media mis-identify the shooter as right wing?