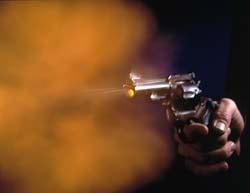 Tucson, AZ—Let me fist say that the vile shooting at Gabrielle Giffords’ meet and greet event at a supermarket was not a political shooting. There is clear and convincing evidence that the accused shooter Jared Lochner is seriously disturbed and incompetent to make a rational judgment.

Lochner’s writings show that he somehow thought people in the government were controlling his mind. Lochner’s personal politics were Leftist. We are slowly discovering that Lochner was a victim of a failed mental health system that did not act when it became clear he was suffering.

A Moderate “Blue Dog” Democrat like Giffords or Judge John Roll, appointed by George H.W. Bush, were hardly the targets for any Conservative Americans. There are however many Socialists in our government that may well deserve that kind of fate for their attacks on Liberty.

Now the mouthpieces of the Far Left are suggesting that hate and vitriol from Conservatives is somehow the cause of the Tucson shooting. Free speech is the spoiler of every Socialist government and they want it curbed. They want only approved political voices to be heard, their own. Any speech but their own is hate speech. Hating Conservatives does not count as hate in their books.

The Second Amendment was created by our founders to deal with tyranny and corrupt government. That means it is justifiable to kill despotic public officials. Most people consider the brave German men that plotted to kill Adolph Hitler and other high ranking Nazis on July 20, 1944 as heroes.

Our own country has a history rich with bloodshed as the price of Liberty and Freedom. Humans by nature hate bondage and government abuse. There are humans that feel a need to enslave and control others. Those are the basic ingredients for violent war in our world.

To pretend that the corruption of our Constitution is some political disagreement not deserving of a violent reaction by Americans is ludicrous! Politicians that plunder taxpayers and initiate slavery must be stopped by ballots or bullets. Too many politicians have gotten away with too much for too long in history and the result is always the same, a human holocaust. Past is prologue, and despots everywhere are deserving of a stiff swing on the gallows.

Americans have seen their schools and health-care system destroyed by illegal aliens who allowed to plunder entitlements. That was facilitated by rogue government officials who broke the law of the land by obstructing justice.

Americans have seen a recession aggravated by Socialists in our government destroying our free market with bailouts to mismanaged and corrupt businesses. Americans have seen laws put in place that violate the 13th Amendment by enslaving them and future generations.

Americans have taken to speech and assembly to redress their grievances to an unresponsive government. The next step is simply not more speech but action as we saw in 1776 and again during our Civil War.

The Second Amendment is one of the tools our founders gave us, to preserve, defend and protect our Constitution. Our Bill of Rights is not open to negotiation outside of the amendment process. Politicians that wish to amend the Constitution by a simple vote in Congress or a 50 percent plus one vote need to understand the bayonet may find and kill them.

Americans must be free to voice their hate of tyranny. One half of a population cannot enslave the other half without bringing violence. Politicians must simply avoid efforts to steal liberty or they may well face justifiable assassination.
Posted by Paul Huebl Crimefile News at 1/09/2011 06:46:00 AM

We're not there yes, Paul. And the recent displacement of the Democratic majority in the House is a very positive sign that "the system isn't broken."
The source of yesterday's events, some are thinking and a few are saying, are the conservatives. But, in fact, it is the "too much, too fast" change that has taken place in the last two years that is the source of any conservative backlash.
The US Constitution is designed to make change a slow, difficult and heavily discussed and compromised matter. This slow methodicalness is intentional -- the founding fathers knew from history that too much change in too little time would cause problems. So the Congress can be overruled (vetoed) by the President, and Congress and the President both can be overruled (as un-constitutional) by the Supreme Court.
Slow is good.
Too much change in too little time leads to instability and emotionalism. What we see now in so much of the news is, as they tell us, commentary not reportage.
At this source of today's instabilities are the rapid changes of the past two years. It's too much, too fast.
That is the true source of what happened in Tucson yesterday. Yeah, it took a nut case to perpetrate it, and yes he is to blame, but the general tenor in this country that provoked his act to small or large part, are not his.
Too much change too fast. Don't ram these changes down our throats. The Constitution is designed so that we move slowly and with consideration for all parties.
The time for violence is *not* at hand.
Instead, it is time to slow down.
The pendulum swings back, and then it goes forth.
Slow down.

This AM I watched the faux conservatives at Fox news blame the conservative American Renaissance group for the shooting in Arizona. They portayed the group as anti-semites. I happen to know Jewish members of AmRen. This group is not anti-semetic. The AmRen group has actually taken a lot of heat from real anti-semites for not attacking the Jews! The president of AmRen, Jared Taylor, has been verbally attacked by the David Dukes of the world for having a hands off policy on that issue. The news media get most of the info about conservatives from the anti-americans at the SPLC. I think that explains it all.

Any politician that tinkers with American's LIBERTY needs to be very afraid.

But if this is one motivation, it certainly would not account for shooting many of the others.

This leads me to believe that this is just another deranged massacre along the lines of Virginia Tech, Columbine only it occurred off campus by a Community College student who had been banned from the Community College Campus.

I guess if he felt alienated before...He's going to feel even more alienated now. It is a pity that no - one was able to prevent him from buying a gun.

Just found out that the shooter is in fact Jewish and also belongs to the same very small Jewish congregation as Giffords. They had to know each other as did the Rabbi. Yet the Rabbi has maintained silence on this and has allowed the media to paint the shooter as right wing! Check this out, Paul.