The Folly of Carrying Exposed Weapons 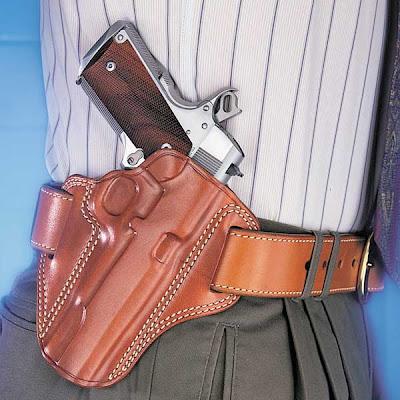 Los Angeles, CA—I hear many questions about carrying exposed weapons. The inquiries are always from the few states that ban carry generally. Some think exposed carry is a way to self defense. Exposed carry is nearly always a bad idea.

Before protective vests and better holsters over 50% of cops killed, were murdered with their own guns! Lesser trained civilians won’t have it any better.

Carrying exposed firearms makes people targets. You may become target of strong armed robbers looking to arm themselves with your gun.. You will become an object of ridicule and scorn from drunks and others that see you armed. Frankly today, the sight of a civilian carrying a gun provokes some unreasonable folks into a breach of the peace. Last but not least is exposed carry generates phony reports to the police of aggravated assault.

If someone sees your gun and accuses you of pointing it at them police will respond and investigate. When they have a witness/victim and you have the gun, your chances of being wrongfully arrested and even convicted of a felony are huge without independent witnesses or video.

Carrying an exposed gun places you in physical danger and may destroy your reputation as a law-abiding citizen. With that comes, incarceration, job loss, home foreclosure, divorce and disgrace. It’s far less risky to discreetly carry a concealed gun even if it violates some politician’s gun ban.

If you feel the need to carry a firearm in defense of yourself and family don’t let unconstitutional laws stop you. Carry your gun concealed but as always avoid conflict when possible. Why demand exposed carry when you can simply demand the right to conceal your weapon and thereby avoid breaches of the peace?
Posted by Paul Huebl Crimefile News at 1/15/2011 10:56:00 AM

I grew up in Chicago (East Rogers Park) in the '60s and '70s, but now live in a small city in the South. In my state they have "Shall Issue" concealed carry, and let me tell you the incidences of violent street crime is far lower than Chicago. The vast majority of violent crime here is: love triangle related, drug related, gang related, or goofs running their mouths related; however, there are rarely completely random violent attacks and muggings. This can be attributed to thugs knowing that some people carry concealed.

I have a couple of liberal acquaintances (o.k. I can't lie - friends) who are basically against gun rights; and they take the position that its o.k. for people to carry openly, but not concealed. I attempt to use logic (I know - logic and liberals don't mix), that because I carry concealed, they benefit, because criminals don't know who is carrying. If people were to carry openly, than criminals would know who not to accost, and everyone else would be an open target, just like Chicago.

Laws that prohibit open carry are illegal and immoral.

Any form of gun control is illegal because it violates the 2nd amendment. Gun control is immoral because it disarms peaceful law-abiding people and leaves the criminal (and govt ) armed, and thus invites crime and creates more victims.

The only defense of open/carry is that it is safer for most gun owners. Too bad Jared Loughner was not openly carrying, eh ? Maybe it would have cut in half his beneficial element of surprise.

If you think the govt has a right to regulate guns it's because you have been brainwashed by the newsmedia. You may be a gun owner who is also a hoplophobe.

I see this is in the Socialist republic of California. Perhaps because of the historical facts that California is Anti-American, Anti-Free, and Anti-Follow the US Constitution, I can see why the writter of this article leans toward no OC. Perhaps, if Socialist Republic of Cali was Shall issue, you wouldn't see so many OCers. Perhaps, if Fairytale life didn't exist in S.R. of C. and indoctrination that the Government is good, the good folks born and raised in S.R.of C. would fully understand what Freedom is.
Great article for gun control and backward thinking!!!

Many of the folks I see open carrying appear to be cream-puffs. Take this guy for example. http://www1.thetvnet.com/watch-fJVpCMyMKWU/abc-news-covers-open-carry-in-livermore-ca-captures-illegal-detainment-and-search.htm

He definitely has that "metrosexual" vibe going for him.

Notice how disrespectful the cops are to a guy they have previously contacted on several occasion and most egregiously, they harass him while he's being interviewed??

Regardless, I have no problem with what another citizens sees fit to do.

Those "kangaroo" pouches that ride over the groin seem to work well for some people.

Here we see Walter is in fact known to the officers and his rights violated. http://www.youtube.com/watch?v=NHvk0vY6fwk&feature=related

Should he sue, Paul?

What about for field use??Like a backup handgun for bear and such.I would hate to see this turn into another way for the antis to start limiting us.The Second Amendment says I can carry anywhere in any fashion.

Suburban Chicago PO: Open carry in public? God bless anyone that wants to. NOT ME THOUGH! NO FREAKIN WAY!

Im not going to mix the issue by including SPECIAL USE AREAS. Special use areas being wilderness back country, national parks, hunting property (public/private), ect. I SUPPORT this type of open carry.

Alright back to the point.

For those who say open carry would be a deterent for crime, I agree. I'll let those people be the crime deterrent(insert sarcasm) and/or the initial target by default.

It's like the guy that drives around with the "This vehicle is protected by Glock" bumper sticker. His vehicle is the first one I would break into in hopes to find a weapon, ammo magazine, ect... BE ANONYMOUS! DONT STAND OUT UNTIL YOU CHOOSE TO!

Why project yourself to the predators?

As a young PO I've taken pride in blending in. When shit hits the fan don't be the target, be the solution.

Im not gonna speculate as to the recent horrific shooting in Arizona. But I will say this.

How many attempts on presidents, politicians, foriegn dignataries, high profile businessmen, have occured under the OPEN KNOWLEDGE that these people are protect by a armed agent/s?

If your worried about second amendments rights... God bless you. I see the control issue now being ammo.

The mind is the single greatest weapon we have. Use it. Blend in. Follow John Boyd's OODA loop theory. Run the WHAT IF situations through your head daily.

Ultimatly... Stay safe. Were not of value to the sheep if were the DEAD.

A lot of people have passed this article around to various chat sites. They have either not read the article fully or misunderstand.

I support all forms of carry as a Constitutional Right. On the other hand I find open carry has severe disadvantages. I certainly don’t want government regulating any right.

Buffalo, perhaps you are unaware that in California there is either unloaded open carry, or no carry at all. So its either try to protect yourself and practice loading, or be a total sheep with zero protection.

With one exception I can think of, every officer I know around here who ive asked fully support OC. They prefer it to CC.

Let me make it clear no cop gets to re-writes the Second Amendment for the U.S. Supreme Court. I don’t give a rat’s ass for what some claim cops prefer!

Heller and McDonald reaffirmed the right to carry and asswipe politicians won’t infringe on how I carry.

This is the kind of incident that open carry brings along with a felony conviction and prison sentence.
http://www.breitbart.com/print.php?id=D9L4TD980&show_article=1

...it brings a conviction that ends up with a FULL pardon? Oh no. And the charge was that he pointed it at him/threatened the man; not nearly for OC'ing.