Travis Munroe Townsend Is A Patriot, Not A Criminal!

Glendale, AZ—Arizonans are taxed to death. Many can barely afford to keep a roof over their heads, feed their families and must go without health insurance.

Despite this Arizona’s never ending supply of government bureaucrats have plush officers, take home vehicles and too many perks to mention. Arizona’s government grows faster than cancer. It’s become a monster that feeds on the backs of everyone and there is no control in sight.

Arizona has installed new speed cameras on Arizona highways that spit out well over 40,000 tickets in just two months of operation. Does Arizona have a huge accident problem that led to this draconian enforcement? No, but they have a revenue crisis because of over-spending and runaway government growth.

In the spirit that made this country, a Glendale man is accused of taking a pickaxe to a photo enforcement camera. Travis Munroe Townsend, 26, was charged with criminal damage, interference with a traffic-control device and criminal trespass. 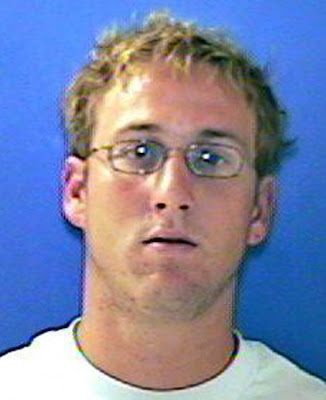 The felony charges may well give Townsend grief for the rest of his life as the young man looks for employment opportunities. Hard hit by the cost of living in Arizona, is Townsend himself who works as a subsitute teacher. Townsend is an American patriot not an outlaw.

If ever there was a case for jury nullification and a Not Guilty verdict this is the one. Townsend’s “crime” is no more or less than that of those Americans that dumped tea into Boston Harbor so long ago. We need thousands more motivated freedom loving citizens just like Townsend to say no to runaway government.

Here is a press release from the Arizona Department of Public safety
on the traffic camera program.
photo_radar_12.02.08
Publish at Scribd or explore others:
Here is video from Townsend’s initial appearance in the Maricopa County Super Court located in the Madison Street Jail basement during the wee hour of the morning.

Send him to Chicago and let him work on our revenue builders!

In Britain they have 5,000 of these fixed devices and hundreds of mobile patrols ripping off motorists. The most likely people to get ticketed are older people doing 33 in a 30 limit. It's a revenue raising scam pure and simple.

Paul, I don’t know whether to call you a Liberal or a Conservative. You’re all over the place.

You’re pro-gun rights, anti-illegal immigration, anti-death penalty as you demand rights for people accused or suspected of crimes. You wage all out war on the TSA. You want a total end to drug enforcement. Now you want to let a man go that damaged thousands of dollars of public property.

You detest government doing more than the bare essentials.

I swear you must be an Anarchist. I have to say I agree with you too much of the time.

Any government that would attempt to disarm its people is despotic; and any people that would submit to it deserve to be slaves!

H. Yoakum, Vol. I HISTORY OF TEXAS FROM ITS FIRST SETTLEMENT IN 1685 TO ITS ANNEXATION TO THE UNITED STATES (1856) at page 330 (statement attributed to Stephen F. Austin).

I went to school with Travis, he is a great guy and very active in the community... He even coached my nieces for swim practice... GO TRAVIS... these cameras are rediculous...

Since Travis is a school teacher, who better to teach kids about the Bill of rights and the Boston Tea party?

He is not a hero, a patriot, he is a moron, who just did something stupid that will ruin his life. No school will hire him now, and why, because of some stupid camera?

They are there, so deal with it in a mature manner and what Travis did was not mature.

Take it from someone who grew up on the mean streets of Arizona, if you do something here, you do it quiet.

The dumb ass moron should of purchased a can of black spray paint, and tagged the cameras. Then they would blame it on gang bangers, not some dumb ass white boy.

Then he could of gotten more then just the one camera, and best of all, the Goverment you all so much hate, would not even notice it for a while..

Think before you act Travis, and maybe your dumb ass would of not gotten caught if you just tagged the damn camera, and blacked out the protective glass.