Is Your State Broke And Begging For A Bailout? 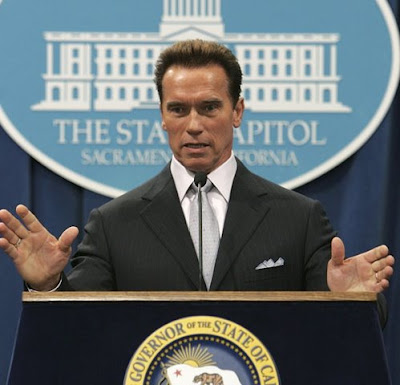 Sacramento, CA—Our favorite Terminator, turned Governor, Arnold Schwarzenegger has declared a fiscal emergency saying California can’t pay its bills after February. He says they will pay vendors with an IOU.

That’s not surprising on a state run by Left Wing people that look to enslave their citizens to pay for so much crap nobody wants or needs. Now they look to people in more frugal states to pay for the mess they made.

I have a simple solution to help states like California and Illinois through their difficult times. My plan will reduce lots emissions, and also help save the planet. I propose this as a long term solution with no serious side-effects.

If this is an emergency like Governor Schwarzenegger any solution should be on the table.

Front vehicle license plates are of limited value, create pollution during manufacture and most importantly burns money. Many states like Arizona do fine without them.

Legislatures used to meet only once in two years. Now they furiously make new unneeded laws non-stop. They need to return to the old way and save us all serious money.

Our courts require public paid lawyers to travel great distances and spend hours in cars to attend court appearances where no evidence or testimony is presented such as a simple motion for a continuance. This should be done over the internet in real time teleconferencing.

Reduced workweeks will save on energy, pollution and government cost. Other than emergency service workers we can all save a bundle here.

We have all manner of licenses that expire in as little as a single year. Huge amounts of paperwork must be shuffled all over the state. Some of the licenses are for simple occupations like barbers. The same regulation and safety standards can be maintained by vastly extending time before license renewals. How may unnecessary paper chasers can we eliminate if we really tried?

We pay to house too many prisoners who are no longer a threat to public safety. They need to be cared for outside of expensive prisons. Well behaved and qualified prisoners should be allowed to work on our economy. They can certainly do the work illegal aliens are hired to do, pay for their upkeep and child support too. The prisoners can return to their cells after work.

Here is a twelve-step program to bring state governments back to health:

1. End manufacture of front license plate for vehicles.
2. Triple the amount of time before driver’s licenses are expired.
3. End vehicle emissions testing for all vehicles less than three years old.
4. Have State Assembly meet only once every two years.
5. Triple the Amount of time before any occupational license expires.
6. Triple the amount of time before business and notary licenses expire.
7. Require Courts to mandate internet teleconferencing for Motion, practice and hearings without sworn testimony.
8. Release all prisoners that are physically incapable by age or infirmity of criminal conduct.
9. Allow qualified non-dangerous prisoners to take legitimate jobs in the private workforce and pay for their food, housing, and child support while in prison.
10. Reduce state office hours, workweek and employee pay by five or eight hours.
11. Require state employees in large urban setting to pay for parking of personal vehicles.
12. Study ways to eliminate certain vice related laws and taxing the incomes of those workers.
Posted by Paul Huebl Crimefile News at 12/06/2008 10:05:00 AM

Heres the one that will cure the deficit. TAX THE RACIST INDIAN GAMING CASINOS.

They need to go after all of the illegal aliens and make them pay up. LEGAL American citizens would NEVER get away with what illegals do in other countries. It makes me sick.