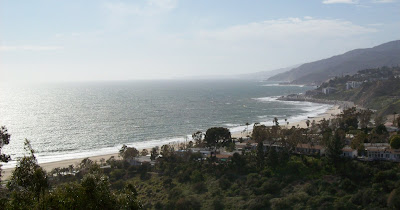 Los Angeles, CA. --Between Santa Monica and Malibu sits the community I consider the best in this region. So do a large amount of wealthy celebrities like Billy Crystal, Michael Mann, Suzanne Summers and Glen Close.

The LAPD has virtually abandoned this community of patrols because of its citizen’s stellar behavior. The crime here is limited to home invasions and burglaries. Our faltering economy will only make things worse.

Budget cuts and violence in other areas are threatening to leave this area even more under-policed. The burglar alarms can only summon police and an already intolerable police response time is aggravated even more.

The real answer for this community is secession from Los Angeles and creating their own police force. Why pay taxes to a city that does not provide adequate services. The problem is the votes for such a move come from the impoverished areas that love the huge amount of money that the city coffers get from these rich Westside folks.

Los Angeles can always be counted on to turn their backs on the Westside residents and their needs. This is a no-win situation.

The long term solution is armed private patrols. There is a huge problem with nearly all of the private patrol operators. They have low paid people with very little formal training who must be limited to observe and report duties and calling police in order to deal with burglars and such. What’s really needed in a no-nonsense well trained security force that both observes and arrests the predators.

Rather than contract with a large company that serves others they need some licensed retired cop to set up a program tailored for the needs of their local homeowners. Rather than calling 911 and getting put on hold, the residents call the cell phones of their own patrol officers who would all be mature and stable retired cops.

A system of inexpensive, real time web based cameras can be installed that could be observed by the patrol service and the homeowners from anywhere in the world should also be used. The camera installation must be carefully done with privacy considerations for all residents.

I’d limit the patrol officer’s responsibilities to the suppression of violence, robbery, burglary, theft and trespassing. I’d also want to cross-train the patrol officers as paramedics and keep first aid equipment and defibrillators in their patrol vehicles.

The LAPD will continue to maintain police jurisdiction and follow-up on criminal activity discovered and reported by the private patrol officers.

Most of what police officers do during their shift has little to do with arresting, investigating. Officers usually help citizens will all kinds of needs. A well-oiled private security force could do wonders for the people left to self-help by uncaring government bureaucrats.
Posted by Paul Huebl Crimefile News at 12/02/2008 07:59:00 AM