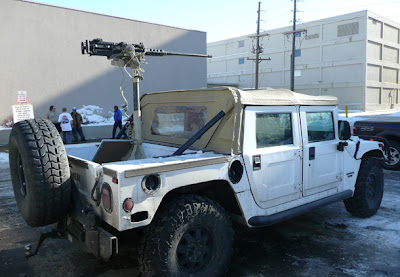 I can only imagine the huge hullaballoo that would result in Washington, D.C., New York, Chicago or Los Angeles if cops saw this vehicle in those jurisdictions. News helicopters would be flying overhead as the big city cops arrest the vehicle’s driver at gunpoint. Prosecutors in those places would be demanding a very stiff prison sentence even though this gun nor any like it have ever been used in a crime in America.

The sight of this vehicle on a public street would put most big-city Liberals into cardiac arrest. The fact is this .50 caliber machinegun is perfectly legal in a lot of states.

Who owns this little toy you ask? An outfit in the Denver area called Machinegun Tours. I spotted this little gem outside a gun show in Denver while on an assignment there yesterday. They use this Hummer to promote their business. It pays to advertise.
Posted by Paul Huebl Crimefile News at 12/30/2007 02:02:00 AM

Paul you gave the impression that ‘machine gun tours’ was toting that 50 caliber around on their vehicle while driving in public. If they are, then they are being 100% irresponsible, and counter-productive, and let me tell you why. You hit the nail on the head when you said, “They use this Hummer to promote their business. It pays to advertise.”

It is all about money for them, and not the principle of supporting and promoting the second amendment. When my father had me join the NRA in 1969, I was only 10 years old (Although I need to renew my membership.) I was taught then “never point a gun at anything you’re not willing to shoot.” Well driving around with a 50-caliber machine mounted on your vehicle is not responsible gun safety. I appreciate their zeal, but they need to channel their efforts and advertising in a more productive way. It is gun owners like this, that gives the gun grabbers and anti-gun cops a platform to stand on.

I can appreciate two men in a pickup truck with rifles in the rifles racks in the rear window. Nevertheless, I don’t blame a copper for stopping the Hummer with that on the back. There’s a difference in being ‘reasonable’ and ‘unreasonable.’

Below is a video of a very sophisticated armed vehicle.
http://www.youtube.com/watch?v=M1Mp5E2Cob0

Note: I am a big supporter of the 2nd Amendment, that’s why my business is called what it is.

For the reord they do drive this well-armed Hummer around in public.

I can understand a PR issue maybe but I don’t see a gun safety issue here at all.

If there is a real Second Amendment that applies to individuals this is absolute constitutionally protected activity. The problem has been the Supreme Court’s reluctance to interrupt this issue one way or another. That of course has changed when the court agreed to hear the Heller/Parker case on the D.C. gun ban. We will have the answer sometime in June of 2008.

If the keeping and bearing of arms is a right there is nothing wrong with this vehicle and gun nor should cops stop it without Probable Cause for criminal activity.

Again if this is a right the PR factor is a dead issue because gun owners need not beg for rights that have been turned into privileges only given out to the élite members of society.

The real reason we don't have so-called road-rage in Colorado-- everyone is able to carry a loaded firearm in their car. That's right, in Colorado, the personal vehicle is considered an extention of the home.

In Los Angeles, only the Adam Henry's who don't care about the law in the first place are the ones shooting in road rage capers.

Imagine a transplanted jerk who doesn't know this and tries to play out his California-type road rage only to have the innocent person he is shooting at return fire most likely with a better weapon and aim.

Back in sunny Vietnam, on the highway from Quinhon on the coast back to Pleiku in the highlands, I was following a jeep armed like the one you displayed. We were so close that I was surprised by a pothole and swerved left into the oncoming lane. And that surprised a jeep coming towards us. For whatever reason the dumbass captain in the approaching jeep stood up waving his 45 at me. But as he was pulling his weapon, the chief in the jeep ahead of me swung his 50 around so that it was pretty much straight across from the captain's ear. The captain sat down as quickly as he'd stood up.

Of course this all happened in seconds, but it's stayed with me for 37 years, and I recall it whenever I get pissed off in traffic.

So I agree with you, Paul, and Rod -- just being conspicuously armed can be enough to keep people civil.