Gerald Ford’s Would Be Assassin Freed from Federal Prison 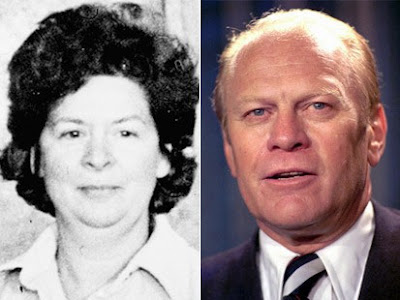 Dublin, CA—One of Gerald Ford’s Would-be killers walked out of prison today after spending over 32 years behind bars. It was September 22, 1975 when Sarah Jane Moore raised her five shot .38 caliber, Smith & Wesson Model 60 revolver, aimed and got one round off as a disabled former Marine interfered with Moore’s attempt grappling with her. Secret service agents quickly took Moore into custody.

Less than three weeks earlier, a Charles Manson follower, Lynette “Squeaky” Fromm tried killing Ford with a Model 1911 Colt .45 semi-automatic pistol. Thankfully Fromm was unfamiliar with her weapon and secret service agents stopped her before she could fire any rounds. Fromm is still in prison today.

Sarah Jane Moore is 77 years-old now and has denounced her actions long ago. My bet is that Moore lives her life out peacefully. After spending so long in prison adjusting to living in a free society today may well be the biggest challenge of her life.
Posted by Paul Huebl Crimefile News at 12/31/2007 03:09:00 PM

Didn't Moore say right after she was taken into custody" If I'da had my .45, I'da got him"?
As long as Im on a PI's blog, whatever happened to the hero Marine?

I doubt she'll be a threat to anyone at this stage in her life. The time she served seems a fair punishment to me.

Is there a reference to Moore's far left political idealisms? Just curious.

Your question is a valid one. Moore was talkative just after her arrest. Her views were the popular Left Wing drivel of that era.

As for 32 years later I have no clue as to where she leans today. I know that she know her actions ruined any chances for a normal life.

She paid for her crime and continues to do so. I wish her a peaceful life for whatever time she has left.

Remember Moore is 77 years-old with no 401Ks, retirement plans and social security that she’s not paid into for over three decades.

It’s difficult for seniors to work regular jobs, with their aches and pains low pay they receive. She’s still on a very tough road.

Somehow I don't anticipate she will live a long time since prison is tough on the mind and body.