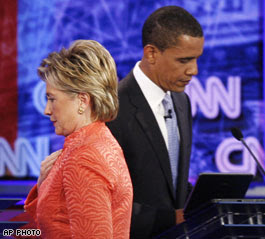 The polls in Iowa are showing Barack Obama is slightly ahead of Hilary Clinton in the race for the Democratic Presidential nomination. That says a whole lot about Clinton’s chances being over-rated.

Hilary may be popular with some Democrats as she rides on her part-time husband’s coattails. America has come a long way in race relations but never far enough that we will elect a Black as President no matter how well qualified. Obama is hardly qualified to take charge of the USA and his being Black has ended this election before it began. A Black president is not going to happen because it’s impossible. I’m enjoying watching Obama spin his wheels, as he goes nowhere fast.

Hilary Clinton is absolutely loathed by Conservatives and Libertarians. Clinton is not really that popular with the Left leaning Democrats either. She changes her position to suit the weather and has supported the Iraq war.

Seeing Obama ahead in Middle America is a clear message that Clinton is doomed to fail. Of course I’m no fan of either of these Bolsheviks and would love to see them both drown in a river.

God only knows who will be our next President. I would like to see both nomination slates cleaned and see a whole new list of candidates. None of our candidates seem to want what the American people want. The biggest example is immigration where 70% of Americans want the illegal aliens rounded up and deported. You’d think we’d have 70% of our candidates on board that idea.
Posted by Paul Huebl Crimefile News at 12/02/2007 05:32:00 PM