Free Speech In Wisconsin Is Not So Free 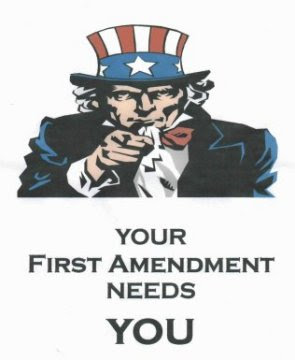 WEST BEND, WI – The Long Arm Of The Law (West Bend police) grabbed a school teacher who’s nonsensical and politically incorrect remark was deemed to be a crime.

James Buss, 46 of Cudahy was arrested for his Internet posting on a Conservative blog. Police said a writer using the name, "Observer" wrote in to say the West Bend teachers' salaries made him sick, and said the killers in the 1999 Columbine shootings had the right idea. "They knew how to deal with the overpaid teacher union thugs. One shot at a time! Too bad the Liberal rip them; they were heroes and should be remembered that way," was the posting that led to the arrest.

Okay this posting was stupid, showed incredibly bad taste, was grossly insensitivity to the Columbine victims and their families but this is just another goofy opinion, not a crime!

I’m surprised to learn that Wisconsin has enough prison space for all the clowns who say silly, insensitive and disturbing things as they vent everyday frustrations.

I guess the West Bend cops are starving for crimes to investigate and people to arrest, fingerprint and photograph. I wonder just how much the taxpayers will have to shell out to cover the cost of the pending criminal case and of course the follow up civil case for violation of Buss’ civil rights.
Posted by Paul Huebl Crimefile News at 12/03/2007 03:48:00 AM

Interesting. Tracked him down thru his I.P. address maybe? things that make you go hmmmm.

This one is an interesting followup
http://whataretheysaying.powerblogs.com/posts/1196799866.shtml

I don't care what his motive was Conservative, Liberal or simply creating giberish nothing there is a a level making this act anymore than protected speech. If we can't protect the speech of a total dope who will protect ours?

Crimefile, I found this part interesting... "Buss, a former president of the Oak Creek School District's teachers union, is on an indefinite leave of absence from the school pending further investigation, district Superintendent Sara Larsen said. He teaches chemistry and has been employed at the school since 1994."

He was not a wacko in fact, but a teacher and former head of the teacher union in his district. Hardly the kind of person you would think likely to be handing out medals to the Columbine perps. I could care less what ideology he embraced. I think it's funny even... a teacher gets busted for his remarks. A lousy provocateur.

But Hey... somewhere along the line, free speech has been determined to not include yelling "Fire" in a crowded theatre, the logic of which I do not understand... as I think if everyone in the theatre believes the fool, they deserve to be trampled.

I am amazed at how the public has been duped into surrendering the regard to privacy in the Dog the Bounty Hunter matter, where it was a private phone call, but still somehow got to be fair game for everyone to scrutinize.
Think any other actors and actresses are watching that wondering if they are going to be next?