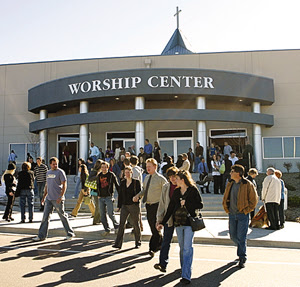 Over 7,000 people came to worship here Sunday and the unthinkable happened. A heavily armed maniac with guns and explosives attacked people as they left the church. Four people were wounded when an alert female, armed civilian volunteer security guard quickly returned fire killing the gunman before more victims could be shot. Two of the wounded victims died later.

With thousands of potential victims in a seemingly soft target of this church the amount of lives saved is staggering. Thankfully this church was not operating with a Gun Free Zone mentality, as they made sure their parishioners were protected.

This clearly shows that armed resistance to armed criminals really works. I expect our lame national media to not make the comparison to similar tragedies like we had at Westroads Mall, Virginia Tech and Trolley Square.

The New Life Evangelical Church assault investigation will unfold and perhaps others may learn that soft targets need not be so soft by simply recognizing that guns in law-abiding citizen's hands do save lives.
Posted by Paul Huebl Crimefile News at 12/10/2007 12:59:00 AM

Hi Paul, Now you know i'm a loyal fan of your blog - I love 99% of your stuff BUT, Spector & The Guns thing tick me off and make me look for a pie to throw at you! (you like apple right?). People have had ENOUGH of GUN SHIT! Right to have arms was reserved for a "well regulated militia" - not for every whacko who has ID for his age. Face it, LESS GUNS IN CIRCULATIION WILL MEAN IN THE LONG RUN, LESS SHOOTING GOING ON. WE KNOW BURGLARS STEAL GUNS FROM HOMES & business AND EITHER THEY WILL USE THEM OR SELL THEM TO THOSE WHO WILL. So come on Pally, lets get the old rope out for that "Spector in Spandex" freak and lets stop arming the whack jobs of the world. But hey, I still dig ya man - and will be back tomorrow to read ya. Merry Christmas! The Old Copper.

Hey anonymous,
Get your head out of your ass and smell the gunpowder!
This is the only way to handle things sometime, police can't be everywhere all the time! I commend what that woman did, there should be more brave people like that in this sick world that we live in!

Right to have arms was reserved for a "well regulated militia".

I don't think so....Every amendment to the constitution has to do with individual rights. This includes the 2nd amendment. Why in the world would the constitution protect the right of the government to have an armed militia? Think about it.

We will never, ever remove all firearms from the people. We have to be able to protect ourselves, and banning guns ONLY affects law abiding citizens, as the criminals are not at all affected by new laws.

Regulated or not, the "militia" consists of every male aged 16 to 60. They were expected to have state of the art contemporary weapons with ammo. Fat chance of that nowadays.

Exactly why I carry my gun to church...and everywhere else. When the terrorist/scum bag walks in and starts shooting, dialing 911 won't be very effective. But my 40 cal. Glock with the laser sight & +P hollow-points combined with my "Distingushed Master" rating will be very effective.
The not too old Copper.