Phil Spector is Due In Court Today 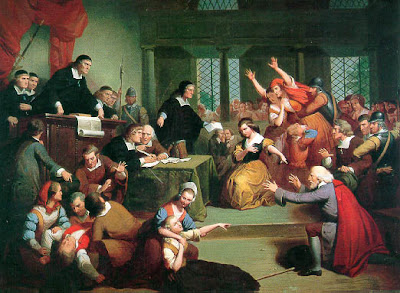 Today’s graphic is from an emotionally charged courtroom during the turbulent times of Salem’s infamous Witch Trials. Has American’s right to Due Process and fair trials improved since those sad days? Perhaps we have fooled ourselves into thinking that we do this stuff better today.

The embattled legendary record producer still maintains his innocence as he prepares again to fight prosecutor’s unlikely theory that the troubled Lana Clarkson was murdered. The case has not gotten any better as all the government’s resources and raw power has set out to convict Phil Spector.

For the government this is a no win situation since the overwhelming physical and scientific evidence reasonable shows that Clarkson’s fatal wound was self-inflicted.
All of the tales from women Phil Spector spurned during his 67 years on earth can’t alter the real evidence.

We may find out today if Phil Spector has a new legal team in place to spend the next year preparing for and defending an innocent man at yet another trial (In case anyone forgot Spector is STILL presumed innocent under our laws).

As soon as I learn the current status I will update this post.

Update #1:
Here is the latest article from the AP’s incomparable Linda Deutsch that covers a recent civil court victory for Spector and yet more lawyer/client discord. High octane civil and criminal litigation is usually volatile and Spector’s various cases are no exception. You can read this here.

It’s official now that Doron Weinberg will represent Phil Spector in further proceedings including any retrial. I will never suggest that this trial will ever happen because I expect a flurry of motions that may yet derail a second trial over things that happened in the first trial. The reality is that such a trial will in fact occur.

Weinberg has 35,000 pages of transcripts to read, all of the discovery material to examine and digest before he can begin to defend Spector. That’s no small task for anyone.

Weinberg told Judge Fidler that September was the soonest he could begin this trial. Realistically I don’t expect any retrial to begin until very late 2008 or even 2009. Fidler set the next pre-trial hearing in the Sprintime of 2008.

In the mean time the Spector Defense will re-investigate every prosecution witness as they re-evaluate every item of evidence. I call that a recipe for success.