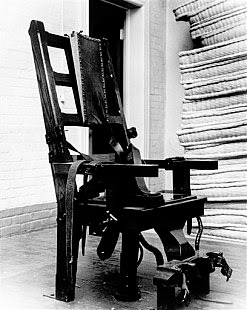 Most of Crimefile’s regular readers support the death penalty. Many want this extreme punishment expanded to other crimes such as child molestation and sexual assault. Yes, too many criminals don’t deserve to live and are a real threat to all of us.

Make no mistake, Crimefile strongly supports the use of deadly force by citizens in defense of self, others and even property. Pacifism is an invitation to non-stop victimization as it endangers friends and neighbors. We only get one life and the instincts our maker gave us to survive is a gift that should never be wasted.

Retribution, revenge or what we call justice is meted out by our vastly over-rated criminal justice system. Over-rated because it too often relies on government snitches that are bribed with freedom for their own despicable deeds. That along with witnesses that lie for a smorgasbord of nefarious reasons or are simply mistaken puts countless people in prison or death row.

Governments with the power to kill their own citizens have a horrible track record of mass murder sooner or later. Giving that power to the politicians most of us don’t like anyway is a terrible idea.

New Jersey has the right idea. Hopefully our Supreme Court will end the practice with the cases up for review this term.

It’s far too easy to frame suspects with phony fingerprint and DNA evidence. An astute professional killer can go through the garbage of someone he wants to frame and collect items such as cigarette butts, used condoms, and beer cans. Clever killers can do their deeds and deposit whatever they’ve collected at the crime scene after a murder. Simply calling in a phony tip to implicate whoever you want will do the trick. Of course rogue cops can and have done this type of evidence tampering while supposedly collecting and preserving evidence at crime scenes.

New Jersey will now save hundreds of millions of needed tax dollars on the non-stop appeals process that goes on for decades after every death sentence. Taxpayers always seem to forget that they have to pick up the cost of the prosecution, defense and courts involved with these cases.

We need to demand fair trials for our accused citizens. Perhaps it’s time to raise the burden of proof since juries guess their way to verdicts far too often. Conviction after a fair trial should bring violent or repeat criminals long-term confinement for one primary reason, to protect the public. Punishment is always a meaningless exercise. Incarceration ends victimization at least while a criminal is behind bars.
Posted by Paul Huebl Crimefile News at 12/17/2007 09:32:00 AM

All right, I'll give em the death penalty. But they should give back the "hollowpoints"!!!!!

Paul, you are a wise and courageous man.

In principle, I'm not against the death penalty. Some of the crimes I've seen committed deserve nothing less.

But the death penalty has to be fool proof, and has to be applied evenly.

It can't be fool proof, and it's never applied evenly. So the only reasonable punishment is life without parole. But it should be solitary for life. Phone calls (monitored), mail (monitored) e-mail (monitored) would be allowed, but no one who kills should ever be allowed to mingle with society, even a penal society.