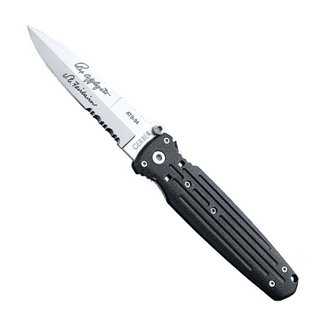 So you think because you carry and know how to use a gun that you will be able to protect yourself from a knife or cutting instrument attack with ease?

For those people that think guns are more dangerous than knives, think again. More than 60% of all people shot with firearms even multiple times survive the attack. Cutting and stabbing victims don’t do nearly as well. Bullet wounds self-seal because of the elastic nature of human tissue. Knife cuts lay open and bleed profusely as the veins and arteries are opened wide.

Then there are those laughably ignorant people (too many are politicians) who want cops or civilians confronted by knife wielding criminals to either shoot the knife out of someone’s hand or just shoot to wound. You’re about to see that such an effort will get you killed.

Watch this video and you will see the knife can easily beat a gun in any contest.

Great video! People seem to forget just how deadly a knife can be! In the movies they always show anyone shot fly back trrouh a plate glass window like he was hit by a truck.

The knife is a real killer.

Gun grabbers and police haters will never, ever understand the danger a knife presents. They should watch this training video....but then, they'd still hate the police and want to grab all the guns.

Im glad this video was made.
I hope everybody who legally concealcarry for protection watches this video.

Good video for the public...old news for a seasoned cop, though. This information has been out there for awhile being taught to police departments from practically everywhere, but the public should also know about the results of an officer involved shooting when dealing with a person armed with a knife.

Nothing personal, but the guy would have been shot about five times before he would have gotten to me...and his skull would have be in about 10 pieces...

Excellent video. But I think it's less about gun vs. knife and more about action vs. reaction. It supports the 21 ft. rule. (Not that I'm saying the knife isn't deadly. BTW, can I download it?)

Good video, and eye opening. Sgt. Dennis Tueller (sp), a working cop in Utah first popularized this fact about 20 years ago, and the doctrine has come to be known as the Tueller Drill. Massad Ayoob makes all of his students in his Lethal Force Institute personally perform the drill at 21 feet under a stopwatch. I’m an NRA instructor in LA and I also use video of Ayoob and Tueller in my class.

I'm not worried about commie gun-grabbers (democrats). When they are banned, their sycophants will be the only ones to have them and...as stated by G. Gordon Liddy...with a knife, I can silently get all the guns I want.

That's because the officer is standing still. The officer needs to move to a defensive and would be able to shoot. Also when confronting a suspicious person gun should be drawn to the side of the officer. That's the way I use to do it.

The latest information I've seen suggests that the 'danger-circle' has a radius of close to fifty feet. This video would seem to support that.

I think that a trained officer would try to side step, but as a trained knife fighter, and pistolero, I agree with the video, I can get my edged weapon deployed very rapidly. To all those that say dont bring a knife to gun fight , they need to watch this video. ALso you can deploy any handl held weapon from a broken bottle to a tire iron, as the defending person is focused on drawing the pistol. Alot of it comes down to who moves first. The human nervous system sends messages at about the same speed, so if the knife guy starts first, he wins.

It's not that a knife wins ANY confrontation, it's that a knife wins when:
1. The attacker is moving towards his target with a weapon that is DRAWN.
AND
2. The target has taken NO action prior to the attack despite the fact that the assailant is using an aggressive stance and his hands are hidden.
AND
3. The targets do NOTHING to increase the distance between themselves and the attacker or DEFEND against the knife except to attempt to draw their own weapon.

So rather than say a knife wins any confrontation it would be more applicable to say "any drawn weapon in the hands of an aggressive attacker is effective against a target that does not defend against the attack other than trying to draw his own weapon."
Wow, that's a cumbersome axiom but for people who just stand there in front of a charging attacker, I guess it's probably useful.
As mentioned above, the Tueller Drill would be applicable here (as would just about any movement in any direction) as well as a pistol drawn to retention position AFTER DEFENDING and EVADING the attack.
Chet

Your gun vs. knife video was taken down. Darn. I wanted to see it.

It just open my eye, to think beyond the whole.

Knife vs gun. Of course it is the distance factor. If one lets a person within knife striking distance it is not a good thing to do. is it? We should remember Bronson in Death Wish and how many times he was cut!